The best: Ronald is all time top-scorer in Champions League with 80 goals 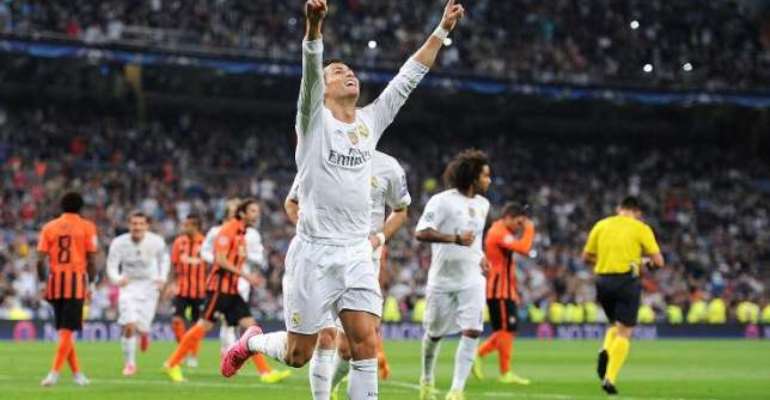 Cristiano Ronaldo moved three clear of Lionel Messi at the top of the Champions League scoring charts after a hat-trick against Shakhtar Donetsk.

Karim Benzema tapped in for Real in their group stage opener before Shakhtar had Taras Stepanenko sent off.

Ronaldo scored a penalty after Darijo Srna was controversially punished for handball and added another spot-kick when Marcio Azevedo handled.

Ronaldo's third was a header which took him to 80 Champions League goals.

Real Madrid's main cause for concern from the game was forward Gareth Bale having to go off injured after 32 minutes.

The Wales international was holding his calf before being replaced by Mateo Kovacic.

But after the Portuguese had bagged five goals against Espanyol on Saturday, he scored his third Champions League hat-trick to move clear on his own at the top.

Ronaldo and Messi have constantly overtaken each other for the honour of the competition's most prolific scorer and the latter will have the chance to respond when Barcelona meet Roma on Wednesday.

The first of Ronaldo's goals came after Srna was adjudged to have handled the ball, despite a shot from the Real forward appearing to hit him on the back.