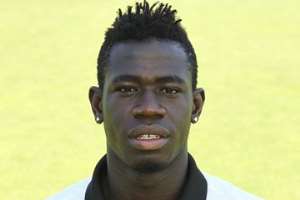 He's pretty sure the relationship with his wife, Amanda, is healthy. And it's same for Jordan Ayew.

Afriyie's wife recently revealed in a leaked tape that she had bedded international teammate, Jordan, for four years prior to their marriage. While passing disparaging comments about her husband - calling him 'monkey' - Amanda had also said that there was tension between the two players.

She did not stop there, as she eulogised Jordan’s sexual prowess and impressive girth.

But in reaction to all this to Joy Sports, Afriyie cooled down the frenzied public reaction to the entire matter.

“We (Afriyie himself and Jordan) are cool. Even two days before we went to camp, he called me and we were talking. Before my club played against Fiorentina, he asked me whether I was going to play or not. So we are cool, we talk so we don’t have any issue. We don’t have any problem.”

It will be recalled that a few months ago, Amanda had been in the news again following the leakage of her nude photos she had allegedly sent to another man.

And following all that, there had been a bit of unease and suspicion when Black Stars coach Avram Grant named the two players in his squad for last month’s double header against Congo and Rwanda.

But the duo co-existed in camp and gelled on the pitch as they beat Rwanda's Amavubi 1-0 in the 2017 Africa Cup of Nations qualifier.

So, what has made Acquah, capped 15 times for the Black Stars with three goals - mentally strong?

"I pray a lot and that has helped me. And you know as a player I need to stay mentally strong. I know I will do even better at my club in the coming months."

The player, who got his debut goal for Torino at the weekend, also confirmed that he is done with fixing the fractuous domestic problems.

”Yeah, yeah. I think right now all is well. In fact [things are] so well that my club mates and officials didn't notice anything. I only told them the story after the international break. All is well with my family," he added.

Acquah had come off the bench to score his first league goal on Sunday in their 2-2 draw at Hellas Verona.