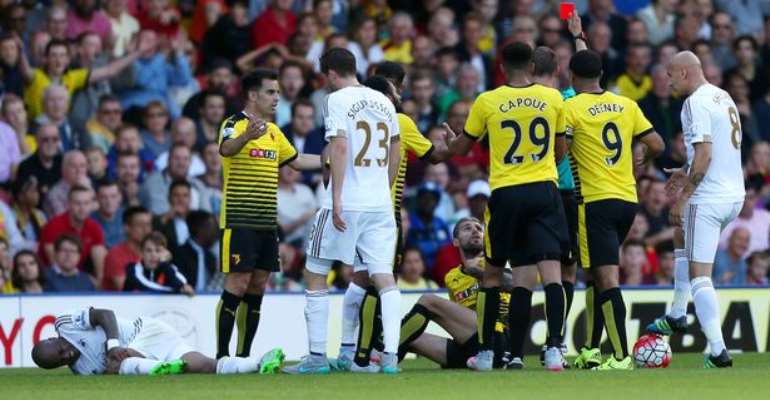 Swiss international Behrami saw red at Vicarage Road for his lunge on Ayew which made contact with the knee of Swansea’s Ghanaian summer signing.

Luckily for Swans boss Garry Monk, Ayew suffered no serious damage though being down to 10 men failed to stop Watford from securing a surprise 1-0 win over a Swansea side who performed well below their usual high standards.

'If you see it on video it is a red card, but the intention wasn't to make a bad foul - I am not that kind of guy,' Behrami said of his second half dismissal.

'I like to play hard but not in this way. I was unlucky but I need to improve and maybe be a little bit cleverer and go on the floor before him and get the foul.'

Behrami, who has won more than 50 caps for his country in a career which has also taken in spells at West Ham, Lazio, Napoli and Hamburg, was also criticised for a poor challenge against Everton on the opening day of the season.

Toffees boss Roberto Martinez lashed out at Behrami for his horror tackle on Dutch winger Kevin Mirallas in a 2-2 draw at Goodison Park last month.

'It was a very dangerous challenge and if you review the action, he (Mirallas) was very fortunate to escape with no major injury,' said former Swans chief Martinez at the time.

'I always try to play fair and I'm disappointed when this kind of thing happens,' Behrami added of the criticism his tackling has received.

'It was unlucky because I just wanted to go on the floor and protect the ball and get the foul.

“Then his (Ayew’s) body was under me and I didn't want to hurt him and that is why I'm glad he came back and didn't get any injury.

“That is the most important thing.'
Source: Walesonline