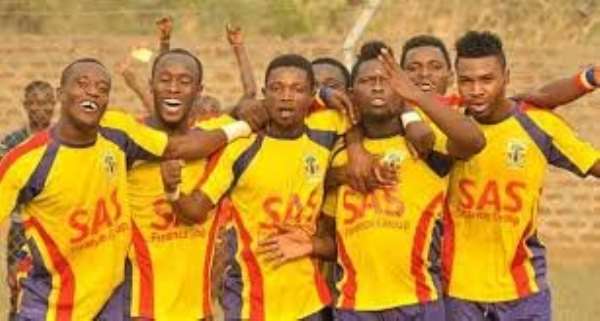 Hearts of Oak beat Berekum Chelsea 3-2 at the Accra sports stadium on match day 29 of the First Capital Plus Bank Premier League on Sunday.

All the five goals on the day came in the second half, Thomas Abbey opened the scoring for the Phobians, but Kofi Owusu leveled the scores for Berekum Chelsea, Emmanuel Hayford restored the Phobians lead, Robin Gnagne made it three from the spot before Kofi Owusu bagged his brace on the day with a neat finish.

Hearts of Oak have gone three games without a defeat and in their game against Berekum Chelsea was a revenge mission after they got stunned 4-2 by the Berekum based club in the first round fixture of the ongoing premier league.

The home side started the game on a low note as they failed to create opening at the defensive line of Berekum Chelsea, the Accra based side dominated play as the away side failed to match the quick passing movement of the Phobians.

However, in the 12 minutes mark of the game, Sarbah Laryea thread Thomas Abbey through on goal but the winger final connection let the home side down as his low shot missed the post by inches, shortly Berekum Chelsea initiated their first dangerous attack in the game but Tetteh Lugard in post for the Phobians came to rescue of the Accra giants as he swept the ball from the feet of Kofi Owusu.

In the 24th minute Berekum Chelsea’s attacker Fumador had the best chance in the first half, the bulky striker fible strike was cleared on the goal line by Hearts captain Robin Gnagne. 2 minutes later the Phobians responded but Eric Kumi drag his shot wide.

The tempo of the game drastically went down, both sides failed to update the score line as the first ended.

From recess, the Phobians came into game all gun blazing as they mounted intense pressure on the away side, Kwame Kizito the worse culprit in Hearts of Oak set up had a two clear cut chances in the 51st minute but he failed to hit the back of the net, a minute later Kenneth Okoro also fluffed his line.

The Phobians never got deflated as they maintained their composure and in the 63rd minute, Thomas Abbey broke the deadlock after he was played through by second half substitute Emmanuel Hayford.

Hearts of Oak upped their game again and Emmanuel Hayford restored the Phobians lead in the 70th minute mark, the Phobians total dominance paid off again in the 79th minute through Robin Gnagne’s spot kick.

But the defensive line of the Phobians went to sleep again as they got punished by Kofi Owusu in the 87th minute who registered his brace on the day, and with 2 minutes of time added on the game was brought to an end as the Phobians pick the three maximum points to move to the 5th on the log sheet with 42 points.