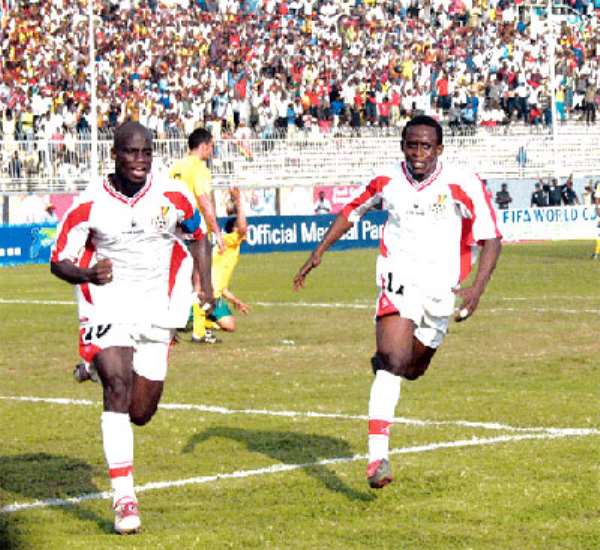 Caretaker Coach, Sam Arday, has the duty to strike the right chemistry for the Black Stars to bring hope to a nation left disappointed and despondent by the wishy-washy performance of the Black Queens and Black Satellites in their respective continental assignments last week.

Welcoming the Democratic Republic of Congo (DRC) in what appears the toughest-ever pairing yet in the African Group 2 of the World Cup qualifiers, the Black Stars who will be playing for the first time since Mariano Barreto left as coach would definitely have to plough power and wits to override the determined DRC.

When the Graphic Sports met coach Arday at the Crystal Rose Hotel at Ahodwo in Kumasi at about 8.30am yesterday,he seemed to be in a hurry to get the core of his players in camp to start training this evening. "I don't have anything to say now", was only what Arday told this reporter, as he hurried into his car, preferring to talk when training gets underway.

Only the Kumasi-based players including Hamza Mohammed, Charles Taylor, George Owu, Yusif Chibsah, Eric Gawu and Issah Ahmed were in camp.Indications were that the foreign-based component of the team would be available by Wednesday.Surely a massive challenge from that country formerly called Zaire awaits the Black Stars as the Congolese,sporting two of the continent's tenacious strikers in Captain Shabani Nonda and Newscastle United's Lomona Tresor Lua Lua, attempt to sweep their way to the top of the group.

Nonda, brainy and powerful and who has the wherewithal to create problems for central defenders, is being lined up for a return to national duty after injury ruled him out of action for some time.A defence featuring the likes of Dan Quaye, John Mensah, Emmanuel Pappoe and Samuel Osei Kuffour should be strong enough to make the DRC attack malfunctional.

A quality team by all standards, the Congolese sometimes are robust and the Black Stars will need to alter the dynamics to go past them.Ghana and the DRC are tied on seven points on top of the table but the Ghanaians are ahead by virtue of superior goals. This makes the match quite dicey.But one thing is clear: The Black Stars need the three points from the game to consolidate their position on the table and drum home the fact that they deserve a place at the World Cup stage.

For once in their long chase for a World Cup final slot, there has been little negativity about the team and the execution of the job is the ultimate dream.The return of captain Stephen Appiah who missed out on the Cape Verde match in Kumasi due to a groin problem gives the Black Stars a focal point for attack.

The Juventus player had played an instrumental role in the forward march so far and much would be expected from him on Sunday.He would be joined by the maligned Udinese attacking midfielder,Sulley Muntari, who also returns to the team after apologising for going public to declare that he had withdrawn his services to the nation in international football.

Kumasi fans have already sworn to give the necessary support to the team to qualify for the World Cup finals for the first time. Indeed it was a shame the way Accra fans greeted the Black Satellites with a chorus of boos when the going became tough in their match against Cote d'Ivoire in Accra last week.Kumasi is directly the opposite and the national team should once again expect maximum support to carry the day.