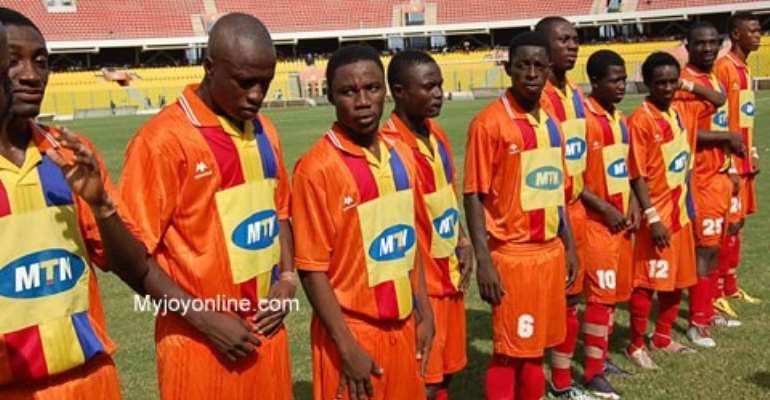 Accra Hearts of Oak centre-back, Philip Boampong, is lamenting over the club’s poor performance to the extent that the team has to earn points off the pitch in order to survive a relegation scare.

The Phobians subsequently filed a protest to the Ghana FA Disciplinary Committee claiming Kotoko had fielded an unqualified player in the person of Obed Owusu.

This resulted in Kotoko being ducked six points after the FA had upheld the protest.

He believes the current crop of Hearts of Oak players have what it takes to mount a title challenge rather than languish at the bottom rungs of the league.

“Let to me alone, I feel ashamed because looking at the caliber of players that we’ve paraded and the performance we’ve displayed so far in the league, we don’t deserve to be at the position we’re on the league log currently,” Boampong told Nhyira Power Sports in Kumasi. “We get insults from people saying we’re not good in terms of play, but we’ve good quality players at our disposal and every player merits to be with Heats team due to his sterling performance. But just that things didn’t happen as the way we expected. It’s a shame that Hearts of oak have to fight and reclaimed that points”.

The 23-year-old centre-back urges his teammates to fight hard and win their remaining two matches for the maximum six points to ensure safety on the league log by clinching all the six maximum points.

“The most important thing right now is to continue fighting hard and win the rest of our game matches. We have to, at all cost, clinch all the six maximum points in the remaining fixtures so that we can confidently stay put on the log sheet based on our accumulated points,” he added.

Accra Hearts of Oak are now occupying the 7th position on the league table with 39 points from the 15th spot on 36 points before the two-week break of the league.