The Only One: Jose Mourinho enters Guinness World Records 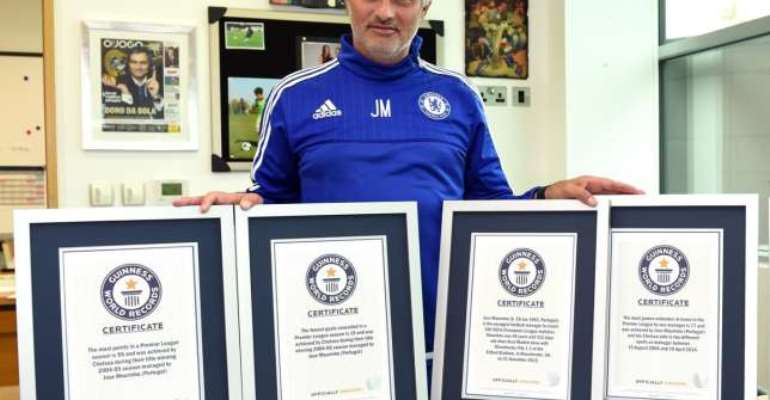 Jose Mourinho may currently be burdened with the task of lifting his under-performing Chelsea side, but the Portuguese tactician does have something to smile about - after the Blues coach entered the 2016 Guinness World Records book with four new records.

Mourinho was presented with four framed certificates at Chelsea's training base in Cobham, Surrey recently after his records - three of which were set at Stamford Bridge - were recognised.

One of those came during his first spell at Chelsea when Mourinho's side secured the most points in a Premier League season (95) on their way to winning the 2004/05 title.

The Portuguese tactician then broke another record after the Blues went the most Premier League games unbeaten at home (77) across his two stints in charge of Chelsea.

And, to top things off for Mourinho, his time coaching Real Madrid saw him set a new record for becoming the youngest manager to reach 100 Champions League games at the age of 49 years and 12 days following Los Blancos' 1-1 draw with Manchester City at the Etihad Stadium in 2012.

After hanging up his new awards in his office at Chelsea's training facilities, Mourinho said: 'The fact that I can hang these awards in my office is nice.

'It's something fun and, as a kid, you could never imagine that one day you would be in Guinness World Records Book.

'I'm now more focused on winning the next game than on what I've done in the last 10 or 15 years.'