Not the best: Harry Zakkour: I am not pleased with Hearts’ board room points 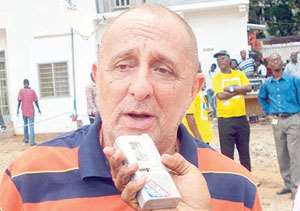 Harry Zakkour has expressed his dissatisfaction over the decision of Hearts of Oak to file a protest against Asante Kotoko over the eligibility of Obed Owusu, which resulted in the decision of the Disciplinary Committee to declare the Porcupine Warriors losers of their match day 25 clash.

Asante Kotoko defeated Hearts of Oak 2-1 on match day 25 of the First Capital Plus Premier League at the Ohene Djan Sports Stadium, Accra.

However, Hearts of oak lodged a protest with the Disciplinary Committee to challenge the eligibility of Obed Owusu, who was on 4 yellow cards, but had a part to play in the game and after the DC's hearing on Tuesday, it declared the Porcupine Warriors losers of that game, hence forfeited the three points that were involved in the game and additional 3 points deducted from their accumulated points.

Harry Zakkour who was the chairman of the management Committee of Hearts of Oak when the club won the CAF Champions League and CAF Super cup in 2000 and 2001, respectively has stated he is not pleased with the Phobians' decision to lodge a protest to get Kotoko lose points they earned on the field.

'If I were the Chairman of Hearts of Oak, I wouldn't have filed a protest against kotoko to get them deducted, because these two sides are power houses in Ghana football.

'Instead, Hearts of Oak and Kotoko should have met to see how they could help each other survive in the league, then after do their homework well next season.

'I don't like the current situation, kotoko find themselves at all for losing point through a protest, after winning a game on the field, but I won't say what the disciplinary committee did was wrong,' he told Fox FM.

Kotoko have decided to file an appeal against the decision of the Disciplinary Committee and also file for a stay of execution to ensure they get their points back, whiles the appeal process goes on.

Meanwhile, the Ghana Premier League, which had about two weeks break resumes on Sunday at all league centres and Kotoko, who are currently lying 15 on the league log, after losing 6 points will make a journey to Sekondi to take on Hasaacas at the Essipong Sports Stadium.