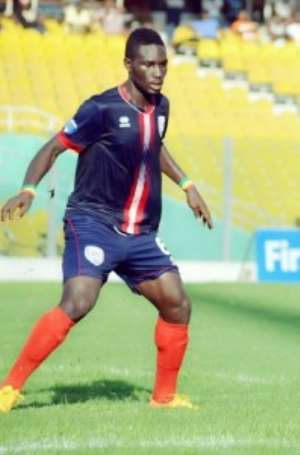 Black Meteors defender Baba Mensah has exclusively disclosed to Ghanasoccernet.com that he was shocked when the call came that he has been invited to join the Black Stars ahead of their friendly with Congo in Brazzaville.

According to the Inter Allies defender he did expect the call to play for the Black Stars to come this early hence his shock and that he will live up to the billing.

“I feel amazed. It came as a miracle but that’s how Allah does HIS things and hoping to shine in the team”, Baba Mensah told Ghanasoccernet.com

Baba Mensah together with Lawrence Lartey and Patrick Asmah as well as midfielders Kennedy Ashia and Samuel Tetteh were drafted into the team to play the Red Devil on Tuesday afternoon.

Coach Avram Grant has called up the five local players to beef up the squad with a number of key regulars expected to miss the fixture due to late arrivals.

The quintet are part of Ghana's Black Meteors squad currently in Brazzaville to defend their All Africa Games trophy won in 2011.

The Black Stars will leave for Kigali to take on Rwanda in their second group H game of the 2017 Africa Cup of Nations qualifier on Saturday September 5.

What's So Special About NAM1 That Akufo-Addo Is Shielding Hi...
33 minutes ago