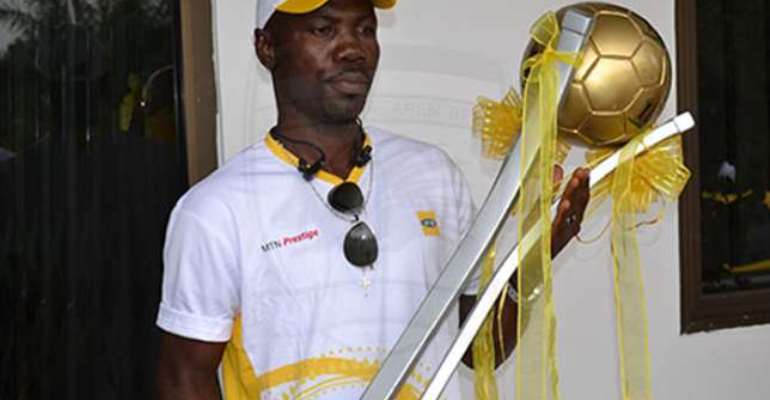 The Local Organising Committee (LOC) for the MTN FA on Wednesday continued their trophy tour by visiting Kumasi the home of Kumasi Asante Kotoko to sensitize football fans ahead of the final on Sunday.

Kumasi Asante Kotoko will face Medeama sc on Wednesday in the final of the 2015 MTN FA Cup to be staged at Essipong Sports Stadium, Sekondi on Sunday.

In order to create much awareness of the upcoming event, the local organising committee formed to help the FA Cup committee ensure a successful final decided to send the trophy to the three cities that are involved in the grand finale, Sekondi, Kumasi and Tarkwa.

The trophy landed in Sekondi on Sunday and on Wednesday it was sent to Kumasi the home grounds of the Porcupine warriors and it will finally land at Tarkwa for fans of Medeama to have a feel of the FA Cup before the final comes off on Sunday.

In company of Twum Barimah was Joseph Hendricks who has been made the ambassador for the final game due to the fact that he won the FA Cup whiles playing for Kotoko and also had a stint with Medeama sc and is also from Sekondi the venue for the final.

At the Kotoko secretariat, the trophy was received by Paul Adu Gyamfi, the board chairman of the club and officially welcomed the trophy to Kumasi.

Will Medeama make it a repetition of the 2013 final or Kotoko will avenge the defeat they suffered in the hands of the Tarkwa based side?