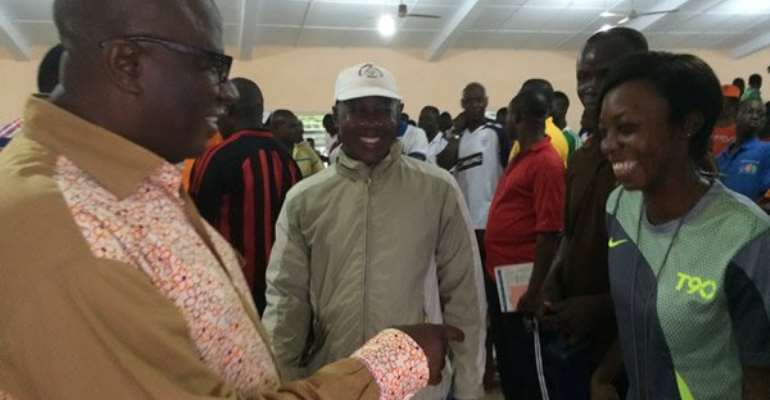 An eighty-two member contingent representing the Upper West in this year’s national inter-school and colleges sports festival has appealed to the Upper West Regional Minister to urgently come to the aid of the team to enable them win laurels for the region.

The regional team that would be competing in athletics, football, volley, basket basketball and netball are currently being camped at the Wa Senior High School preparing for the games to be held on their home soil.

Upper West Camp Commandant, Sessay Abdul Kadir expressed the team's appreciation to the minister for the donation, especially coming from his own pocket.

He said the donation would go a long way to help the contingent. He therefore pledged that they would do everything possible to win laurels for the region.

‘‘ We will not disappoint the region. If we cannot win gold, we will make sure that we fall within the medal zone in all the disciplines that we will take part in.”

Mr. Sessay however informed the minister of some of their challenges.

‘‘ We don't have running shoes for the athletes, or for the footballers. Mr. minster, if you can get somebody to go to Kumasi to get us second hand running and football boots, we will appreciate it more,” he added.

The regional minister pledged to do everything possible to make sure that they win more laurels for the region.

He advised them to be disciplined and be good ambassadors for the region.

“ Sports unite people and we expect nothing from you but be good ambassadors for the region. Treat your colleagues that will come from the other nine regions with the maximum courtesy that is within you. don’t do anything that will put the name of the region in to disrepute.”