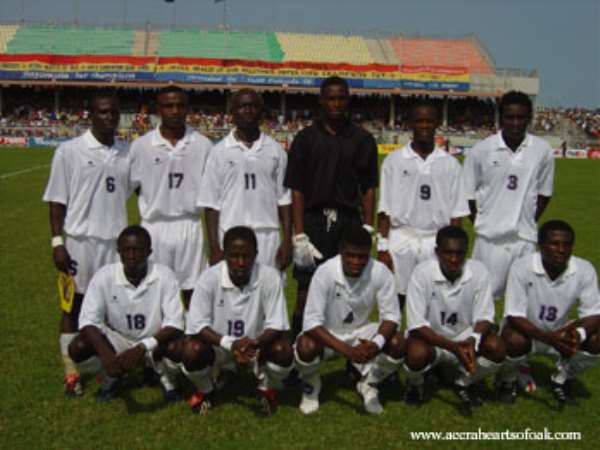 Accra, Sept 22, -- Indefatigable Tema Real Sportive on Wednesday ended Accra Hearts of Oak's 48th unbeaten match run which dates back to the 2002 Premier league with an emphatic 2-1 defeat at the Accra Sports Stadium. The Sportive team which is gradually becoming a bogey side of the Phobians when they knocked Hearts out of the Ga Hamowo Cup and showed no respect to their more illustrious opponents in the Premier league encounter as they occasionally reduced them to a chasing pack at certain stages of the first half. Hearts who came into the match with a promise by Thomas Okine, Chairman of their Interim Management Chairman (IMC) to give Sportive a good drubbing for knocking them out of the Homowo Cup, threatened to score early in the fifth minute when Prince Tagoe broke through the defence but found his shot rebound off the body of Laud Quartey in post for Sportive. Sportive took the early challenge in good faith and pushed forward with some good midfield play which freed unmarked Hamza Abdulai to run solo before firing the ball into the roof of the net leaving a bemused Eben Dida in the Heart's post for the opening goal. Hearts rallied after the goal and came close in the 20th minute when their only threat upfront, Prince Tagoe fired a low drive that whisked past the goal posts with Laud Quartey nowhere in sight. Playing a well compact game as if their very lives depended on the result of the match, Sportive took control of the game again and should have been awarded a penalty in the 27th minute when John Awal was brought down in the box but to the surprise of all, Referee E. N Adjei of Accra waved play on.
As Hearts seemed not to be heeding to the warning signals, Sportive pushed more men into the midfield and with their quick off the ball movements they scored their second goal in the 45th minute through a well-taken volley into the far corner of the net by Sam Nlineaba. Hearts who saw defeat staring them in the face and now in the lion's den, came back into the second half a charged side and threw everything into attack but erratic shooting by their attackers in front of the goal posts post and some tough tackling by the Sportive defenders ensured hey kept their lead intact.
Sportive who beat Hasaacas 4-0 last Sunday showed to all that their victory was not a fluke as they played a compact midfield to deal with the Hearts' threat and were able to clear their lines even though the Phobians were clearly the better side in the second half.
As if the day was not meant to go Hearts way, anytime they went past the tough defenders of Sportive, they found Laud Quartey in fantastic form as he pulled some brilliant saves to maintain his side's lead.
With the game drawing to a close, Hearts brought on Wisdom Abbey for tired Prince Tagoe and on the 90th minute mark, the substitute was on hand to turn a Louis Agymen cross into the net for Hearts consolation goal.