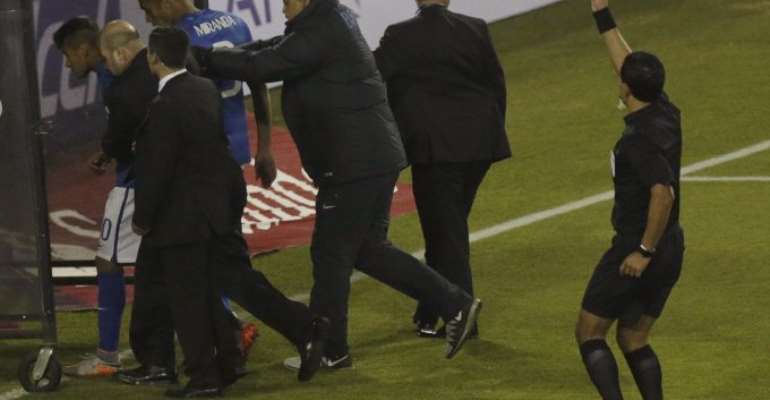 Brazil's Neymar and Colombian striker Carlos Bacca were both shown red cards for brawling in ugly scenes after Colombia's 1-0 win at the Copa America.

The defeat was Brazil's first in 12 matches and the first game coach Dunga had failed to win since taking over following their disastrous 2014 World Cup. Colombia were the better side throughout with defender Murillo seizing on a loose ball to get the all-important goal nine minutes before half time after a Juan Cuadrado free kick had bobbled around in the box.

Scuffles broke out at the end of the match and Neymar and Bacca were both shown red cards.

The Brazilian had already been given a yellow when he appeared to headbutt Colombia goalscorer Jeison Murillo and he will now miss Brazil's next match against Venezuela and probably at least one more game.

The striker was a different man from the one who turned on the style in previous matches for club and country and his team mates blamed the referee for singling him out.

"Referees need to show Neymar more respect," Willian told television reporters after the game. "He is always being targeted."

Neymar suffered another blow on Wednesday as well: the Brazilian has been named as a defendant in a fraud case relating to his transfer from Santos to Barcelona, with the player's former part-owners claiming that they were underpaid by millions when the deal went through.

The case
A Spanish court has agreed to allow a fraud case against Barcelona's Brazilian star Neymar, weeks after the club itself was ordered to stand trial.

But the courts believe the real price paid by Barcelona was far higher.

A Brazilian investment firm which owned 40% of his transfer rights argues it was defrauded out of millions of euros.