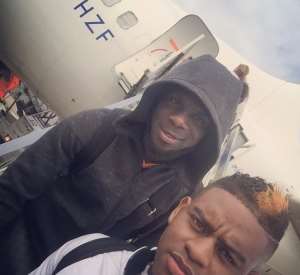 By El Akyereko Frimpong
Feyenoord Rotterdam star attacker Elvis Manu has returned to the Netherlands after meeting Ghana FA officials in Accra over his nationality.

The powerful attacker has expressed his desire to switch his nationality to play for Ghana, travelling to Ghana twice to in the last six months.

He has officially applied to FIFA to hand him eligibility status to enable him to play for Ghana after playing for the Netherlands at various youth levels.

Manu is expected to join Feyenoord’s pre-season training ahead of the brand new Dutch season.