How Liverpool could have BENEFITTED from Ghana ace Andre Ayew, Swansea's new signing 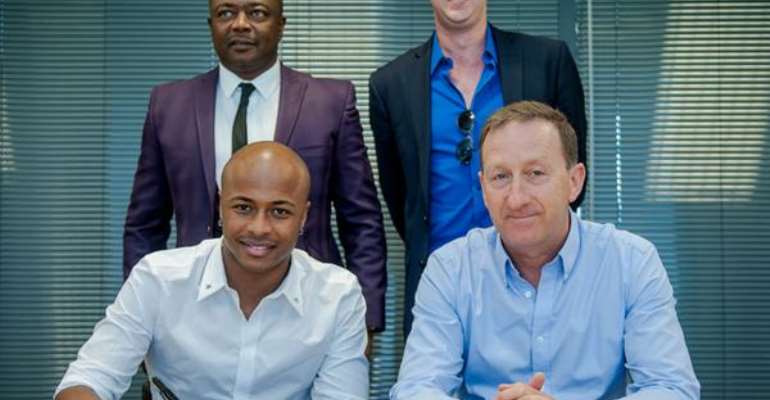 In successfully completing the signing of former Marseille attacker and Ghanaian international Andre Ayew this summer, Swansea have arguably already sealed one of this window's most promising transfers.

Garry Monk's new no. 10 brings with him an impressive reputation within French football, as well as offering fans of the Premier League a showcase of his talents during last summer's 2014 World Cup. The Black Stars favourite not only got on the scoresheet for his nation out in Brazil, but he largely went down as perhaps the most important player among the Ghanaian ranks at the tournament.

As the sons of former Ghana legend of yesteryear - the aptly named Abedi Pele - both Andre and his younger brother Jordan usually get linked with a move to the Premier League with every passing transfer window, yet it seems Swansea ultimately proved worthy of securing the front-man's signature in the end.

So then, does this latest development simply have to go down as a great bit of business for the Liberty Stadium faithful going into the new season, or are there a few subtle catches to this deal that seemingly put other suitors off the idea of landing Andre Ayew this summer?

Well, in signing the World Cup star on a free transfer this month, this particular move seems to shine the Swansea City transfer policy in a truly positive light. Without having to meet a pre-determined transfer fee for the player's services, the Swans have arguably tied down one of the most sought after assets in the whole of Europe largely under the radar.

When it comes to delivering the goods for his side in the final third, Andre Ayew very rarely disappoints. The quick-footed winger often uses his rapid turn of pace to beat defenders on the break, he has proven he can score goals effectively enough in and around the opponent's penalty box - and at the promising age of only 25-years-old - there's still seemingly a lot more to come from this former Marseille star in the not too distant future.

With the likes of Bafetimbi Gomes and Gylfi Sigurdsson in place to work off next season, Garry Monk must be a pretty excited man at this stage in the proceedings when it comes to his latest signing.

There is however, a bit more to this deal than initially meets the eye. Whilst it may come as slightly inconvenient news to the many Swansea City fans out there, their club ultimately paid a great deal in order the finalise Andre Ayew's transfer. In reportedly costing the Swans £60,000 a week and an extra £2 million in signing-on fees, the former Marseille man certainly has to go down as a big investment for Garry Monk's side.

He may carry a strong reputation within the European footballing scene, but as the attacking midfielder currently has no experience of the Premier League under his belt and has only really shown glimpses of true class so far in his career - such a hefty financial move seemingly looks like a bit of a gamble. Fans of the Ghanian national team may view Ayew as a bit of a hero with all things considered, but he simply hasn't proved himself to be worth such a sizeable wage packet in the cold light of day.

Swansea aren't just taking a risk financially with this deal though, as with former Marseille teammate - Andre-Pierre Gignac - reportedly condemning Ayew for his behaviour at the Stade Velodrome, maybe the 25-year-old's character must also come under evaluation.

The bulky French centre-forward seemingly had a lot to say about his ex-teammate in the wake of his recent departure from Marseille; 'A mother*****. He should get lost with his brother, all they did was moan.'

Of course, such an outpour obviously has to be taken with a pinch of salt, but Gignac's words must nonetheless provoke some concern within the Liberty Stadium faithful at the very least.

Having made the point about Andre Ayew's seemingly costly wage demands an apparent inability to get on with some of his teammates though, this deal still looks like it could work out for Swansea going into the new season.

The Premier League offers the player the chance to begin a new chapter in his so far eventful career - and as he ultimately signed as a free transfer this summer - the Swans have hardly broke the bank to secure Ayew's services with all things considered.