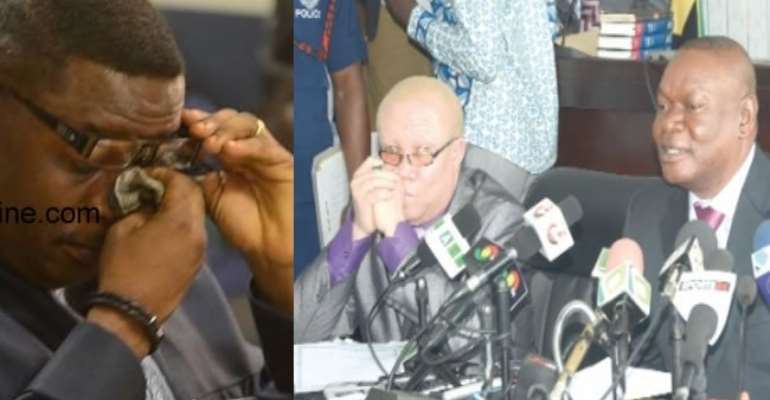 Government’s White Paper on the World Cup report has been criticized for not punishing those believed to be the main architects of Ghana’s messy participation at the 2014 FIFA World Cup in Brazil last June.

Joy Sports Gary Al-Smith believes that it is “preposterous” for the White paper to fall short of punishing big shots like the former Youth and Sports Minister Elvis Afriyie Ankrah who supervised Ghana’s ill-fated participation at a FIFA World Cup for the Senior National team, the Black Stars.

The White Paper was the next line of action for the state after President John Mahama received the report following the end of the Dzamefe Commission’s work in November 2014.

Attorney General & Minister for Justice, Mrs. Marietta Brew Appiah-Oppong, told the Flagstaff House Press Corps on Thursday that Government accepted most of the recommendations of the Commission.

The White Paper is demanding that all those cited for mismanaging funds should refund the monies.

Expressing shock at this recommendation, Gary interprets government as saying “we acknowledge that there might have been some fishy dealings going on but we won’t punish him [Elvis], just go and get money and let him go.”

In another part of the white paper, government also rejected the recommendation of the Dzamefe Commission to have the Sports Minister “personally liable” for any expenditure that cannot be supported with proper documentation.

Dzamefe Commission
Government insists that officials working with the World Cup Committee as “matured” and “experienced persons of stature and substance” and therefore responsible enough to own up to their actions.

For the sports analyst, it means the “buck doesn’t stop with the boss” anymore hence government should go after the “errand boys” who worked under Elvis Afriyie Ankrah.

“[White paper] It doesn’t send any signal to those of us who are aspiring for public office that if you go there and you are not careful, you are not consistent in your dealings, if you make a phone call and you know a few people” you walk free

“We shouldn’t do that”, the journalist expressed disappointment.

Meanwhile the Ghana Football Association and its President, Kwesi Nyantakyi, face a forensic audit for financial dealings in matches played by the Black Stars in the lead up to Ghana's participation in the 2014 FIFA tournament in Brazil.