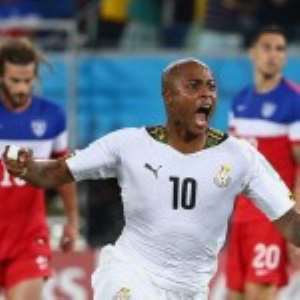 Swansea City are ready to swoop for Andre Ayew - and will make a massive statement of intent by doing it.

Not in the way that some think big transfers should do, a splashing of the cash in some sort of symbolic illustration of power.

After all, Ayew is expected to sign a four year contract on a Bosman free after opting to run down his contract at French giants Marseilles.

No, this is a big coup for Swansea because of the calibre of player they have landed - and what it means for the future.

Make no mistake about it, the Ghana winger is a class act, a player of the kind that simply would not have been attracted to life at the Liberty not so long ago.

It will be something of a coup, if they get him over the line.

While the manner of transfer speculation in the Internet and social media age means a pinch of salt must be taken when looking at the clubs being linked with the former African player of the year, Roma were thought to be genuinely interested as were West Ham while Liverpool, Newcastle and Spurs were all mentioned.

Swansea were known to be admirers but it remained to be seen how strong the interest was and whether it would translate into the kind of wages he would command coming on a free.

It seems they have made the salary commitment - believed to be a bumper deal - over the period of the transfer, considering it as the kind of outlay they would expect to pay in a transfer fee for a player of this quality.

It was the same school of thought that landed Bafetimbi Gomis, who wasted little time in expressing his hope Harry Redknapp’s claims of a deal on Twitter were true.

Every transfer is a risk but those familiar with Ayew’s form on the biggest stage - and you can’t get bigger than the World Cup where he undoubtedly shone twice over – suggests it is one worth taking.

Especially given what it means in terms of that aforementioned statement. It means Swansea are to be taken seriously on their plans to build on last year’s record-breaking campaign.

It means that transfer targets in the pipeline, where Swansea’s strategy is to cast their net far and wide before narrowing their field, will see the club are thinking big.

It means that the players already in place at the Liberty will have to raise their game.

The wide players, so crucial to Monk’s plans, will know they have to hit top gear if they are to keep their place, no inconsistency required here.

Indeed, the thought of the pace of Jefferson Montero and Ayew should strike fear into full-backs up and down the top-flight and add that extra dollop of speed that can make Swansea such an attacking force.

Ayew’s ability to play off a striker fits right in to Monk’s wish for greater adaptability that the side began to show to great success in the second-half of last season.

And he fits the bill in terms of age – he seems to have been around for some time following 62 caps for his country but he is still only 25 - and a hunger to prove himself in the Premier League which the player made known was his preferred destination.

It is still down to Monk to make sure Ayew, he who has played Champions League football, buys into the ethos of the Liberty that has been a big a factor as any in making his Swans a success and it will be a further test of his examination to keep the squad morale high as he continues to add quality.

But this is a transfer that should excite and should show that Swansea aren’t just paying lip service when they say they want to improve. This is a statement of that intent.

Have Confidence In Me, I'm An Honest Leader — Akufo-Addo
14 minutes ago