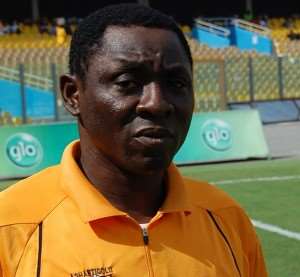 Asante Kotoko coach David Duncan says the 3-1 defeat suffered at the hands of Heart of Lions on Sunday is 'not a fair reflection of the game'.

The champions were clobbered at the start of the second half of the Premier League season in Kpando on Sunday.

Kotoko had beaten Lions 4-0 in the final game of the first round but got a dose of their own medicine with the heavy defeat to Lions in Kpando.

Coach David Duncan who endured his heaviest defeat since joining Kotoko says the flattering result is not the true reflection of the game.

'There were moments in a game, in particular the first quarter of the game, we should have been at least two goals up,' Duncan said in his post-match comments.

'There was for instance a situation where I think we deserved a penalty but the referee refused to give it.

'Ahmed Toure also got a chance but due to his indiscretion, he was unable to go forward to shoot at goal.

'So before Heart of Lions took the lead, I think we should have been at least two goals ahead and therefore 3-1 scoreline in not the fair reflection of the game.'

Kotoko will be hoping to repair their battered reputation when they host New Edubiase in their next league game.

Reconstruction of damaged Bogoso to Anyanfuri road begins
18 minutes ago

Appiatse explosion: victims don't want to be discharged from...
18 minutes ago