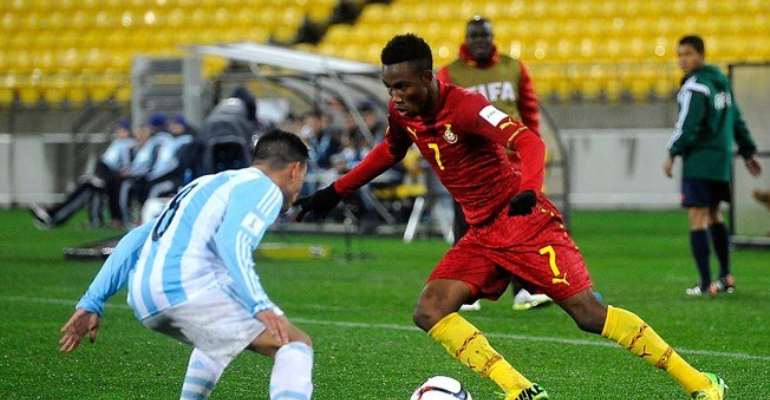 Any talent scouts sitting in the stands at Wellington’s Regional Stadium after Ghana's match against Argentina on 2 June would have been searching in vain for detailed information on Samuel Tetteh. After all, the Ghana winger only appeared briefly in African qualifying as a substitute.

Yet despite his lack of previous international exposure, Tetteh's has been the name on everyone’s lips since his impressive performance against La Albiceleste. The 18-year-old shone thanks to incredible levels of pace that enabled him to tear away from the South American defence. There appeared to be no way of stopping a player who was faster than his opponents even with the ball at his feet.

“His energy and ball skills combined make him a very dangerous adversary for any team,” a delighted Sellas Tetteh – no relation to the country’s breakthrough star – told FIFA.com. The youngster’s display was so sensational that the Ghana coach even made an exception to his usual unwavering focus on collective effort.

“The coach named me the man of the match in the dressing room in front of the whole squad,” the proud matchwinner told us, smiling widely and casting several shy, modest glances towards the floor. Anyone meeting the Black Satellites’ young winger off the pitch would have no inkling of his immense explosive power and athleticism at first glance. In fact, he is of fairly slender build and does not appear as powerful as his team-mates, including younger brother Benjamin, who also scored against Argentina and towers a full 31cm over his sibling. But as soon as he accelerates for the first time, little other than a foul can stop him.

"Yes, I’m very quick,” laughed Tetteh, “but I’m not the fastest in our team.” “He’s right,” confirmed his coach. “Our left-back Patrick Asmah is a little faster still, but he isn’t quite as technically adept as Samuel.” The 18-year-old's dexterity on the ball is probably one of the reasons why he is known as ‘Zidane’ within the Ghana camp. “Samuel has been trained as a central midfielder, which makes it so easy for us to put him out on the wings,” explained the team boss. “He hardly ever loses a ball and is very unpredictable for his opponents.”

Yet despite his nickname, it comes as no surprise to discover that this rising star’s role model is Brazil’s Neymar, as the two already have very similar playing styles and are of comparable physical stature. Tetteh still plays in Africa for the West African Football Academy, founded in the Netherlands by Feyenoord, who continue to collaborate with their African counterparts. Naturally the dream of this particular Black Satellite is to play in Europe one day. “Yes, that’s my main goal,” he confirmed. “I’ll do anything to achieve that and work as hard as I can. I think I’m on the right track, and there’s certainly no better stage than the U-20 World Cup for presenting yourself and generating interest.”

When we asked coach Tetteh whether he could have expected such an explosion in performance from his 18-year-old prodigy, he replied: “Now, there’s no doubt that I know what Samuel can do and is capable of achieving, but it’s true that he was a little inconspicuous before this World Cup. The focus was probably more on players like Yaw Yeboah (the team captain, currently under contract at Manchester City), his brother (Benjamin Tetteh) or Clifford Aboagye (who won the adidas Bronze Ball at the FIFA U-20 World Cup 2013). He certainly stole the show a little today.”

The main event is only just getting started if Samuel Tetteh has his way. “After drawing with Austria we got together to analyse our mistakes in detail,” the youngster explained. “We’ve acclimatised and settled into our game now. The atmosphere is amazing and we’re very optimistic. Now we want to march all the way through to the final.”

Although Tetteh might not be calling the tune just yet, there is no doubt that he has now played his way into the spotlight.