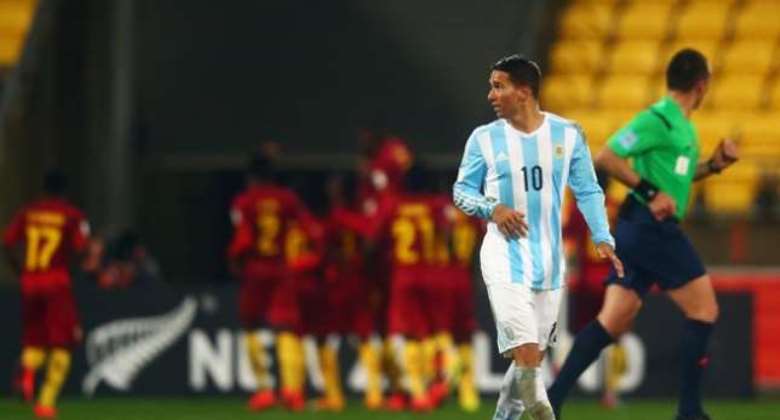 Goals from Benjamin and Samel Tetteh put the African side in command, before Yaw Yeboah's penalty seemingly sealed the result, though late Giovanni Simeone and Emiliano Buendia goals meant a tense finish, but nothing more.

A meeting of the two heavyweights in Group B, once the pair got into their stride they put on a show of attacking football the fixture warranted, with 44 shots on goal across 98 minutes of end-to-end action. Samuel Tetteh was the first to test Augusto Batalla in the Argentine goal, who was set to have a busy half.

However it was the South Americans who would come closest in the early exchanges, with Adrian Cubas' low shot forcing Lawrence Ati into a fine save, before Angel Correa worked his way into the box only to lose his balance and fire over.

The pendulum swung the way of Ghana from there on though, with Clifford Aboagye and Godfred Donsah forcing Batalla into saves. On the stroke of half-time Ghana found the breakthrough. A quick break saw the ball rolled into the path of Benjamin Tetteh, with the Tudu Mighty Jets man's fierce deflected shot near-unsaveable.

Samuel Tetteh almost made it two in stoppage time, but Batalla's save kept the gap down and Argentina flew out of the blocks when they returned. Simeone directed Leonardo Rolan's cross just wide, before Rodrigo Moreira's header forced Ati into one of the saves of the tournament so far.

The six-time champions were on the front foot, but they suddenly found themselves shoved back off balance after a lightning break. Samuel Tetteh led the counter and, with Aboagye in support, the ball was rolled into the path of the Black Satellites captain who stroked it into the far corner.

While it looked a tall order for the South American champions to redress the balance, that prospect disappeared almost entirely when Facundo Monteseirin brought down Samuel Tetteh in the area. Yeboah slotted it away to leave the Africans looking in control.

A rare error by Ati gifted Simeone a simple goal and it looked too little to late, but continued pressure saw Emiliano Buendai halve the deficit and mean Ghanaian nails were chewed in the stands. But time ran out and one of the tournament favourites now faces a real struggle to reach the last 16. The cat is firmly among the pigeons in Group B.

PaFFAG exposes Bagbin over 2022 budget rejection, calls for ...
12 minutes ago