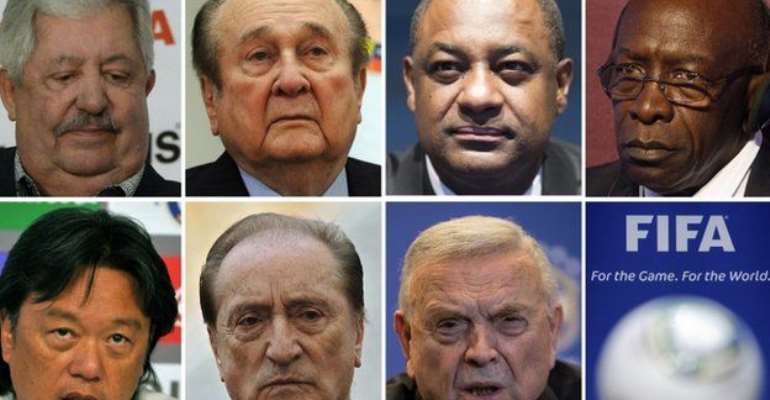 Prosecutors said they had discovered a dozen schemes, including one awarding the 2010 World Cup to South Africa.

Fourteen people are under indictment.
Fifa president Sepp Blatter is not among them. Fifa intends to go ahead with a planned election on Friday.

US Attorney General Loretta Lynch was giving details of the US investigation into football's governing body.

Seven of the 14 sports officials were arrested in Switzerland on Thursday morning.

They are accused of accepting bribes and kickbacks estimated at more than $150m (£97m) over a 24-year period.

"This really is the World Cup of fraud and today we are issuing Fifa a red card," said Richard Weber, from the Internal Revenue Service (IRS).

Fifa executives "used their positions to solicit bribes," said Ms Lynch. "They did this over and over, year after year, tournament after tournament."

"They corrupted the business of worldwide soccer to serve their interests and to enrich themselves,"

One of those indicted, former Fifa vice-president Jack Warner, took $10 million in bribes from the South African government over the 2010 World Cup, the indictment alleged.

When details of the indictment first emerged, Mr Warner said he was innocent and said "the actions of Fifa no longer concern me".

The Swiss have also opened a separate investigation into the bidding process for the World Cup tournaments in 2018 in Russia and 2022 in Qatar.

Swiss police said they would question 10 Fifa executive committee members who participated in the votes that selected the two countries.

This is the "beginning, not the end, of the investigation", Acting US Attorney Kelly Currie said.

Fifa earlier said it welcomed the process and said the vote to elect its next president would go ahead on Friday.