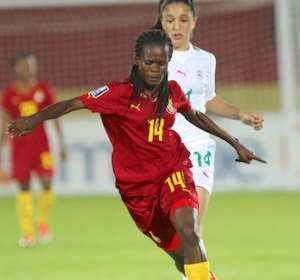 Mercy Myles
Ghana's senior women’s team, the Black Queens, fought out a 1-1 draw with Egypt in their search for a ticket to the 2016 Olympic Games.

Ghana played away from home in the first leg of the second round of the qualifiers at the Petro Sports Club Stadium in Cairo on Saturday.

It was the Black Queens who conceded a goal in the first half before rallying back to pull level through winger Portia Boakye.

The coach Yusif Basigi side, tagged favourites for this tie, return home with an important away goal for the second leg scheduled for the Accra Stadium next weekend.

Should Ghana, who are chasing their first Olympic Games appearance, go on to eliminate Egypt, they will set up an all-important clash against either Guinea Bissau or Cameroon at the third and final round of the qualifiers.

Two teams will qualify to represent Africa at the 2016 Olympic Games in Rio de Janeiro.