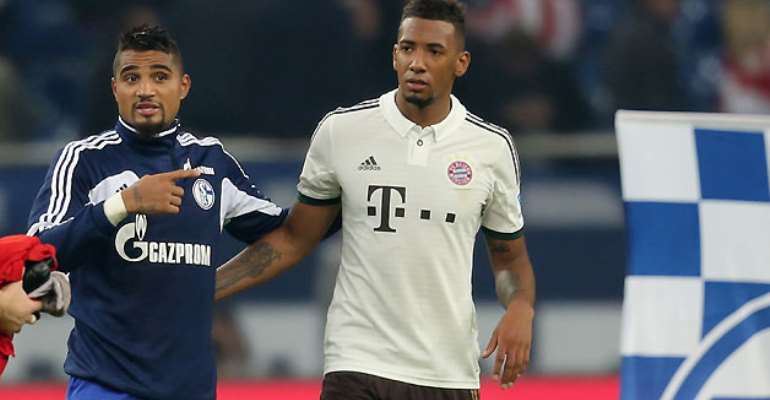 Kevin-Prince with his brother Jerome

Bayern Munich star Jerome Boateng has lashed at Schalke for their unfair treatment to his brother, Kevin over the cancellation of his contract.

Boateng, who plays for Ghana at international level had his contract terminated with immediate effect at Schalke over poor performance.

The former AC Milan star is being sacked from the German club for his negative influence on the team with his bad attitude.

Boateng's contract termination has been taken up by the professional players union in Germany who are demanding that his contract which has one-year more to run is restored.

The 28-year-old's brother who plays for giants Bayern Munich says his big brother is being made an unfair scapegoat at Schalke.

“I was surprised when my eldest brother George informed me [about the suspension],” he told SportBild.

“At first I did not know what to say. He’s disappointed by those in charge at Schalke, and I absolutely understand it.

“It’s clear that Schalke were looking for a scapegoat. My brother did not feature in the first XI for weeks.

“And only because he then started once in a team that’s played unsuccessful for weeks, he all of a sudden is supposed to have dragged them down?”

“I also asked him what was going on here. He told me of the difficult situation at Schalke, and he has not been himself.

“He is human and very disappointed by the person in charge at Schalke, and I understand absolutely.

“That’s just it, what would he have to do against Cologne? Suddenly shoot five goals in a game?

“Why is the whole team is not criticized for a defeat? Instead one throws out only two players, one of them being Kevin who only came off the bench for five weeks and has always given everything anyway.”