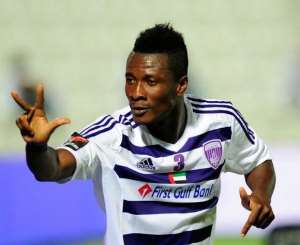 Al Ain striker Asamoah Gyan believes he is nearly back to his best and hopes to prove it in the first leg of his side’s AFC Champions League round of 16 clash against arch-rivals Al Ahli on Wednesday.

Gyan, who joined Al Ain from Sunderland in 2011, scored 44 goals in 40 appearances last season. However, he has been unable to match that record this season as he has struggled with injuries after representing Ghana at the Africa Cup of Nations in January.

However, the 29-year-old is pleased that he has scored four goals in his last four matches and hopes to add to his tally of 13 goals this season in the midweek fixture against Al Ahli.

“I am a professional football player and there are going to be injuries in my career,” Gyan told reporters. “Personally this season has been a difficult one for me and I have done well to come back. Other strikers have done well to score in my absence.

“We are the best right now and scoring after returning from injury has helped my confidence levels.

“The most important thing is we need to have a winning mentality. Winning has been a part of us now and we strongly believe we can win.”