Frank Nelson: Hearts board member counting on miracle to edge past Esperance in CAF Confederation Cup 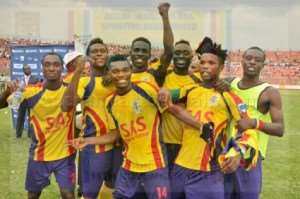 Hearts board member Frank Nelson remains confident the side will overturn a 4-0 deficit against Esperance to qualify to the group phase of the CAF Confederation.

The Ghanaians suffered a baptism of fire after they were demolished in Rades on Sunday with Black Stars defender Harrison Afful scoring one of the four goals.

The Phobians have a huge mountain to climb in their quest to the group phase with the huge deficit ahead of the return encounter in two weeks.

But former board member Frank Nelson insists they remain unwavering despite the big defeat.

“There are a lot of things in football and lots of miracles do happen,” he said

“It has happened before and can happen again. We have been in such a situation before and we manage to turn it around.

“We lost the same margin to St George of Ethiopia and when we returned to Ghana for the second leg, it was different story. Everybody knows what happened.

“It's difficult but we can beat them and qualify. Miracles do happen in football.”

Hearts have an audacious task of progressing at the expense of the Tunisian giants in two weeks time in Accra.