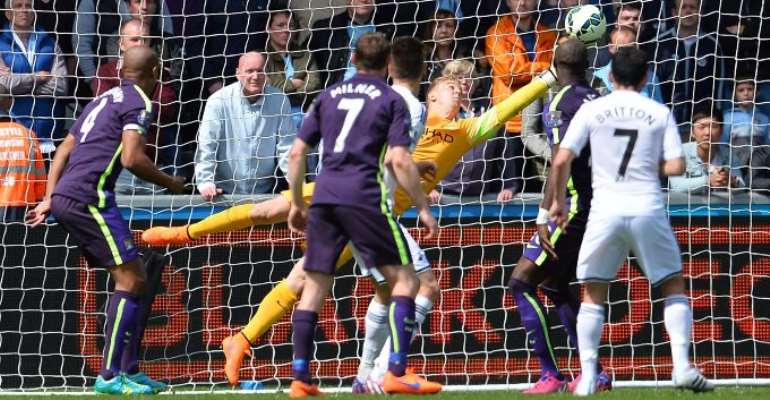 Manchester City strengthened their hold on second place in the Premier League with an entertaining 4-2 win over Swansea City at the Liberty Stadium.

The visitors opened up a two-goal lead against the run of play, with Yaya Toure scoring courtesy of a deflected shot past Lukasz Fabianski into the far corner, and James Milner skilfully skipping round the defence just after the half-hour point.

Gylfi Sigurdsson gave the hosts some hope on the stroke of half-time, rewarding the hard work of Jefferson Montero by lashing home a strike from the edge of the box. And Bafe Gomis drew them level just after the hour, deceiving both Eliaquim Mangala and Martin Demichelis to fire home.

But Toure put his side back in front in the final quarter, crashing through the Swansea defence and powering past Fabianski at his near post.

There were still chances for Swansea to get something from the game, but Joe Hart kept his team in it, clawing Federico Fernandez's header out of the top corner, and then batting Gomis's close-range header away.

It was Wilfried Bony, of all people, on as a substitute against his former team, who put the game beyond reach in injury time, knocking his shot against the inside of the post and across the line to secure the points, then immediately holding his hands up in apology to fans of the club he left for City in January.

Second-placed City now move six points clear of Arsenal who play the first of two games in hand at Manchester United on Sunday afternoon. The defeat ends Swansea's hopes of Europa League qualification - they are guaranteed to finish eighth.