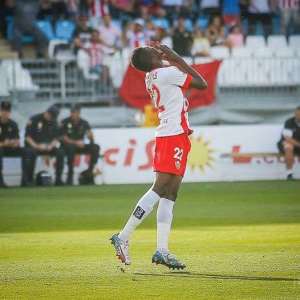 UD Almeria midfielder Thomas Teye Partey has backed his teammates to avoid the drop in the Spanish La Liga this season.

The 21-year-old midfielder was on the scoresheet once again despite being on the losing side against fellow Andalusian side Malaga last Staurday.

Almeria face a tricky tie away to Sevilla who have lost just once this season at the dreaded Sanchez Pizjuan stadium on Sunday, however, Partey says his side could beat the EUROPA League finalist come Sunday and leap to a comfortable position on the league log.

"It is hard [to win at Sevilla] but nothing is impossible, Teye Partey told Allsports.com.gh exclusively.

"We will just go and do ur good works and if we get luck, we will make good use of our chances in that game. We will try our best because we are going for a win.

Almeria remained 16th in the Primera Division table after the defeat to Malaga but are just one point above Deportivo La Coruna, Eibar and Granada.