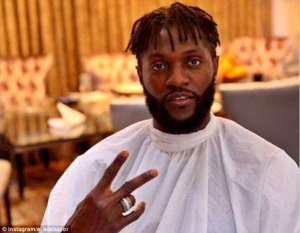 Emmanuel Adebayor has been on the fringes of the Tottenham squad this season and the striker appears set for an exit from the London club this summer.

So with a change coming on, the 31-year-old changed his hairstyle and uploaded a picture of the new cut to Instagram.

Adebayor appears to be an unwanted player by boss Mauricio Pochettino and almost joined West Ham on loan in January.

The deal was halted in the final moments of the transfer window by Daniel Levy but a departure over the summer will not surprise Spurs supporters.

Pochettino is expected to conduct another overhaul of his squad with Adebayor, Aaron Lennon and Paulinho among the players thought likely to depart.

Tottenham host Hull at White Hart Lane on Saturday, with Steve Bruce's side two points away from escaping the relegation zone.