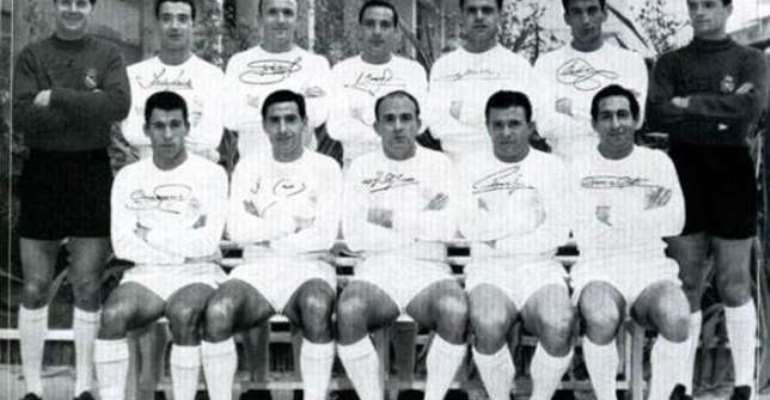 On 13 May 1960, Real Madrid won their fifth consecutive European Cup Final, beating Eintracht Frankfurt by the score of 7-3 in front of a crowd of 135,000 people at Hampden Park in Glasgow.

Real's road to the Final was relatively easy, with impressive victories over Luxembourg side Jeunesse Esch (12-2 agg.), Nice (6-3 agg.), and La Liga rivals Barcelona (6-2 agg.), though the Meringues did lose the first leg to Nice 3-2 at the Stade du Ray before claiming a 4-0 win in the second leg at the BernabÃ©u.

Frankfurt's path was similarly smooth, with wins over Swiss side Young Boys (5-2 agg.), Austrian side Weiner Sportclub (3-2 agg.), and a 12-4 aggregate demolition of Glasgow Rangers.

In the Final, Frankfurt took an early lead with a goal from striker Richard Kress in the 18th minute. Real then opened the floodgates, however, with a hat-trick from their star Argentinean striker, Alfredo di StÃ©fano (27', 30' 73') and four goals from their equally-stellar Hungarian forward, Ferenc PuskÃ¡s (46', 56', 60', 71'). Frankfurt's forward Erwin Stein scored two late goals (72', 75'), but the brace was a small consolation, as the match was effectively over by then.

Although one-sided, the match is widely considered one of the greatest European finals in history.