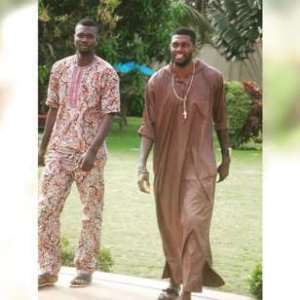 Emmanuel Adebayor has posted a picture of himself and his brother who allegedly stole 21 phones from a football academy in France.

The former Arsenal striker hours ago revealed the photo of the said Rotimi [brother] and added that, 'When the time is right Rotimi Adebayor's story will come out in Part 2 [of his Facebook posts].

The Tottenham striker a few days ago took to his Facebook page to reveal in detail the controversies surrounding his relationship with his family.

In the revelation, Adebayor mentioned that he sent one of his brothers, Rotimi to a football academy in France; where he was kicked out after stealing 21 phones.

"When I was in Monaco I thought it would be good to have a family of footballers. So I made sure my brother Rotimi gets into a football academy in France. Within a few months; out of 27 players, he stole 21 phones," Adebayor revealed in his Facebook post.