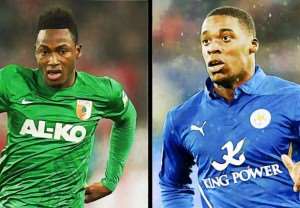 Abdul Rahman Baba and Jeffrey Schlupp have been among the top Ghanaian performers of the season. The former has helped unfancied Augsburg into the Europa League places, while the latter has been in fine form as Leicester City fight magnificently against relegation from the Premier League.

The two players could feasibly contest Ghana's left-back berth for the next decade, but who is the better of the two?

Which of the duo should be the first-choice full-back for the Black Stars moving forward?

At the 2006 World Cup, Habib Mohamed and Emmanuel Pappoe shared responsibilities at left-back.

Four years later, another Germany-based left-back, Hans Sarpei, took one of the full-back berths for the Black Stars during their marvellous run to the quarter-finals.

Sarpei made his name in German football, featuring for the likes of Duisburg, Koln and Wolfsburg. He left Bayer Leverkusen in the summer of 2010 for Schalke, where he ended his career two years later.

I can remember Sarpei being taken apart by Antonio Valencia and Fabio when Schalke were defeated 2-0 by Manchester United in the 2010-11 Champions League, and by Inter Milan's Maicon in the same tournament.

Then, If not before, it was clear that Ghana needed someone new…

But who have the options been since then?
Sarpei | Five years without a true successor

Lee Addy…a hard tackler, but it was concerning that he was already playing in China in his early 20s, and a lack of pace has long been a worry. Similarly, while a resolute option, Addy rarely made significant offensive options.

Masahudu Alhassan? Where did that dream die?
Harrison Afful (the incumbent at the 2013 Afcon) or Daniel Opare could, of course, do a job on the left, but the majority of Ghana fans would surely prefer the pair elsewhere in the backline.

Former coach, Kwesi Appiah, faced with the left-back conundrum, opted to employ Kwadwo Asamoah on the left-hand side, much as his previous coach at Juventus, Antonio Conte, had done in Serie A.

On one hand, the decision made sense. Asamoah is an excellent and dynamic option down the left, where he has the technical prowess to make a difference in the attacking third, the intelligence to defend resolutely, and the energy to do both jobs.

Ghana have never been short of fine central midfielders, and had the stars aligned and the injuries evaporated, Sulley Muntari, Kevin-Prince Boateng, Michael Essien and Stephen Appiah could have shared responsibilities down the middle, Asamoah would have been an elite option on the flank.

However, with those four out of the picture (for various reasons), with Emmanuel Agyemang-Badu stuttering, Asabob is needed in the middle.

Fortunately for Appiah's successor Avram Grant, and for Ghana fans, there's no longer any need to play either Asamoah or Afful in the left.

Baba | Starred at the 2015 Afcon, but is he the future of the left-back berth?

The years of concern, of compromise, of square pegs in round holes are over—for the foreseeable future, Ghana can call upon two of Africa's finest left-backs. An argument could perhaps be made that three of the best five left-backs in Africa are Ghanaian…but that's a subject for another day!

At the moment, it looks like Baba is the incumbent, and edges ahead of Schlupp in Grant's thoughts.

Ahead of Ghana's recent two friendlies—when he was injured—the Augsburg man had started 12 of the Black Stars' previous 13 matches, and excelled at the 2015 Africa Cup of Nations. Indeed, the 20-year-old was one of the breakout stars of the tournament, and was unfortunate not to make the team of the tournament.

Baba's form in the Bundesliga has prompted talk of a major transfer this summer, with Chelsea and Manchester City reportedly keen on the former Greuther Furth man.

While Baba stepped almost instantly into the first XI, Schlupp has had a stop-start international career.

After an initial foray into the squad in 2011, the Foxes man was overlooked for three years, before returning to the side just ahead of the 2014 World Cup. He featured against the Netherlands in a pre-tournament friendly, but missed the cut for the trip to Brazil.

Surprisingly, he was also overlooked for Frank Acheampong for the recent international friendly against Senegal.

On one hand, it's easy to compare the two players based on their league performance this term. Baba has started 26 matches, coming on as a substitute in two (a reduced figure considering his participation in the Afcon), compared to 27 starts for Schlupp and two substitute appearances.

However, one crucial difference is the relative status of their respective clubs within the division they are in. Augsburg—up in sixth in the Bundesliga—are enjoying a terrific campaign, having won 13 matches. Leicester, by contrast, have won nine matches and are in 16th in the Premier League—only one point ahead of the bottom three.

Defensively, Baba has emerged as one of the key contributors in the German top flight, let alone in comparison to his Ghana rival. He beats Schlupp when it comes to aerials won per match, tackles per match, clearances per match and interceptions per match.

Offensively, however, it's a much closer contest.
Schlupp is a more successful dribbler, has a higher accuracy pass rate and also scores more (three to Baba's zero), however, when it comes to assists and cross accuracy, Baba leads the pack.

Another caveat is the players' slightly different roles for each of their clubs; while Baba plays much more as an orthodox left-back—albeit with a licence to attack—Schlupp has been a versatile asset as Nigel Pearson has varied his approach at the King Power Stadium.

The former Hamburg man has featured as a left-back in a back four, as a left wing back in more of a 5-3-1-1 formation, or on the left of midfield in a 3-4-3 formation.

It will be a delight to experience the outworking of this great rivalry for Ghana's left-back position over the coming years.