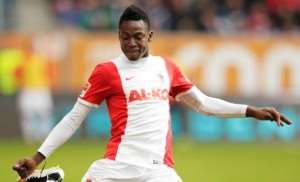 German top-flight side Augsburg have slapped $25m price tag on their talented Ghanaian defender Baba Rahman who is wanted by English giants Chelsea and Manchester City, GHANAsoccernet.com can reveal.

Chelsea and Manchester City have entered the race to sign the right-back who is also wanted by Italian club AS Roma.

Insiders close to the player have told Ghana’s leading football news outfit, www.ghanasoccernet.com that Augsburg will demand $20m for the soft-spoken Rahman.

The amount is the buyout clause in the Ghanaian player’s contract.

Chelsea are reportedly set to offer in the region of $15m for FC Augsburg defender Baba Rahman but they will have to improve their offer if they can sign the Ghanaian.

With its huge financial backing from its Arab owners, Manchester City can afford to buy the player to boost their side with the price quoted by the German club.

According to French newspaper L’Equipe, the Ghanian full-back has impressed Jose Mourinho this season after breaking into the Bundesliga team following his move from second-tier German side Greuther Fürth last summer.

The 20-year-old has made 28 appearances for FC Augsburg, who currently sit in sixth place – the final Europa League qualifying spot in the Bundesliga.

Rahman, who captained Ghana’s under-20 side two years ago, has made 11 appearances for the Ghanian senior team, including being part of Avram Grant’s 2015 African Cup of Nations squad, which finished runners-up.

It is believed Manchester City are also interested in the Ghanian starlet, though it seems the Blues are set to make the first move to secure his signature.