Doom!!! Hearts of Oak will not qualify to 'Money Zone' - Joseph Nettey 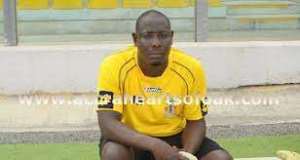 Accra Hearts of Oak were given a tough opponent in the final phase of the CAF Confederation Cup qualifiers. The Phobians were drawn Tunisia champions, Esperance.

And former Hearts player, Joseph Nettey says 'there is no way' Hearts of Oak can qualify to the money zone of the CAF Confederation Cup.

According to him the current Hearts of Oak team is not good enough to upset the former Africa champions.

"Esperance is going to beat Accra Hearts of Oak home and away," he told Joy FM.

"There is no way Hearts can beat them (Esperance). If you watch our league now, Hearts of Oak is not performing well and can't see Hearts beating Esperance considering the way they play,"         Nettey noted.

He added: "I'm not against Hearts of Oak, far from that but the truth is that Hearts cannot beat Esperance.

"When was the last time Hearts of Oak won the league in Ghana? Their position in the league is either 12 or 13th, which is very bad. How can such a team beat Esperance, he quizzed.

"If you're to compare Hearts of Oak and Esperance now, Esperance are far ahead of Hearts."

Hearts of Oak's encounter with Esperance will be a repeat of the 2000 CAF Champions league final; when the Phobians defeated Esperance 2-1 in Tunisia before beating them 3-1 in Accra to win the title.

Joseph Nettey together with stars like Ismael Addo and Sammy Adjei won the trophy.