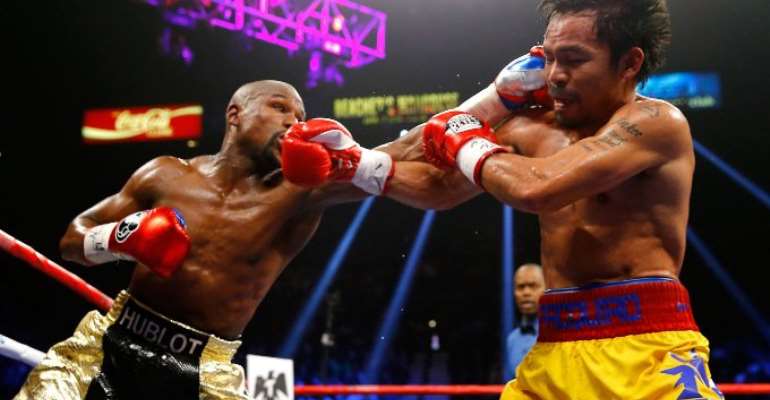 Floyd Mayweather has said he is willing to grant Manny Pacquiao a rematch following the Filipino boxer's disclosure that a shoulder injury hampered his performance in last weekend's world title showdown, ESPN reported on Tuesday.

ESPN said that Mayweather told journalist Stephen A Smith in a text message that he was ready to don gloves once again, after Pacquiao recovers from surgery to repair a rotator cuff.

"I will fight him in a year after his surgery," Mayweather said in the text message, according to ESPN.

Mayweather's apparent readiness to step into the ring with Pacquiao once more appears to contradict remarks he made in the aftermath of his victory in Las Vegas on Saturday, when he insisted he planned to retire after one more fight in September.

"My last fight is in September, and then it's time for me to hang it up," said Mayweather after his unanimous decision victory.

The 38-year-old, who is just one win away from matching Rocky Marciano's 49-0 record, has previously said he has no desire to move past the heavyweight's revered unbeaten benchmark.

However while it is doubtful that any rematch with Pacquiao could generate the levels of interest and income seen in their first encounter, it would still earn enough to be a money-spinning duel.

Pacquiao's camp on Monday issued a statement confirming that the Filipino had suffered a "significant" muscle tear in his shoulder.

"We have an MRI scan that confirms he has a rotator cuff tear. He has a significant tear," surgeon Neal ElAttrache of the Kerlan Jobe Orthopedic Clinic said.

Pacquiao's camp have complained that the Nevada State Athletic Commission barred the fighter from receiving treatment for the injury using an anti-inflammatory injection approved by the United States Anti-Doping Agency.