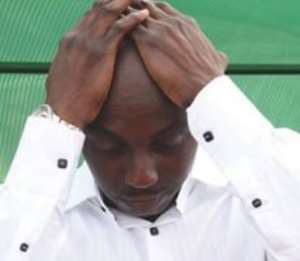 National U-23 Eagles coach Samson Siasia has declared that he is not scared of playing either Ghana or Congo in the final round of qualifiers for the 2015 African U-23 Championship billed to hold in Senegal in December.

Complete Sports can report that the Championship which is in its second edition will be played between December 5 and 19.

According to the Confederation of African Football, CAF, the Championship will also serve as qualifier for the 2016 Olympic Games in Brazil.

“Well, we are a team and we are always ready to play any team, all I can tell you is that we are monitoring events and also doing our best to prepare for the challenges ahead of the team”, begins the former Super Eagles handler.

“Both Ghana and Congo are good teams and we are not going to underrate any of them that we have to face in the final round of the qualifiers.

Siasia who led the Dream Team to beat Zambia 2-1 in Lusaka in their last qualifying game of the All Africa Games to qualify for the event billed to hold in Congo said he is well focused to ensure that Nigeria qualify for the Olympics.

“We are going to do our best to make sure we qualify for the Olympics having secured the ticket to the All Africa Games.

Meanwhile, Ghana will play Congo-Brazzaville for the right to face Nigeria’s Dream Team in the final qualifying round for this year’s African U-23 Championship.