EXCLUSIVE: Ex-Ghana youth star Michael Anaba in line for U23 call-up ahead of All Africa Games qualifier against Congo 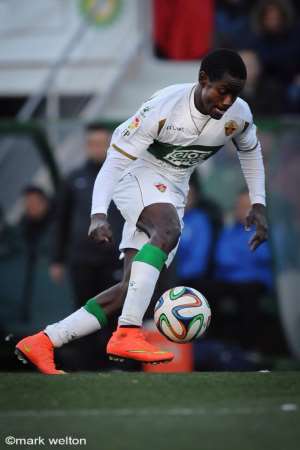 Former Ghana Under-20 midfielder Michael Anaba is line for a call-up into the country's Olympic team ahead of the 2015 All Africa Games qualifier against Congo later this month, GHANAsoccernet.com can exclusively reveal.

Anaba, who currently plays for Spanish side Elche, is being considered to beef up the squad ahead of the first leg tie at the Tamale stadium on May 23.

The highly-rated former Asante Kotoko combative midfielder has impressed heavily for the Elche Youth team, where has played in every single game all season.

He is among a number of foreign-based players who will be called up into the team as the country seeks a comfortable win in the first leg ahead of the reverse fixture in Brazzaville.

The Black Meteors advanced to this stage after a 7-1 aggregate win over Liberia- with both legs being played in Ghana.

The winner will face Nigeria in July in the final qualifying round where seven countries will advance to join hosts Senegal for the tournament.