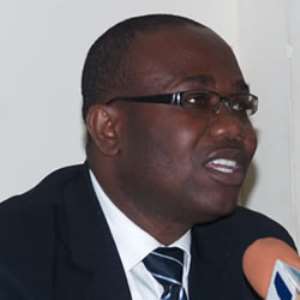 The angry fans had directed their anger at the football chief following the turning down of the club's mid-week break request by the Premier League Board (PLB).

They followed him to his car at the Accra Stadium, hurling insults, with others going to the extent of pelting him with bagged water, but the timely intervention by some sympathizers ensured his safety.

The fans were incensed as a result of the fact that the PLB had failed to grant their mid-week 'holiday' request, which according to them accounted for their poor showing in the Confederations Cup game.

Management of the club, ahead of the domestic league round one final midweek fixture, wrote to the PLB to postpone their game against Ashgold in Obuasi; but the request was turned down.

To the fans, the team's long trip to the mining town of Obuasi led to the 0-1 defeat to the Malian side.

Notwithstanding the loss, Hearts progressed to the final stage of the competition, having won the first leg 2-1 on foreign land.

Meanwhile, some officials of the club have condemned the fans' actions.

'Nyantakyi is not a PLB member, and has no hand in the turning down of the team's request. There have been instances where Kotoko's request was turned down on similar grounds,' an official said.