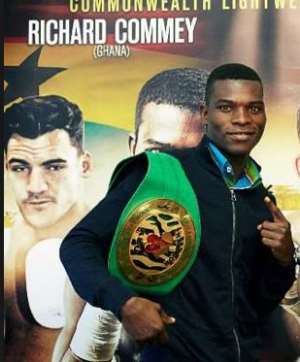 Accra, May 4, GNA - Richard Oblitey Commey, Commonwealth Lightweight Champion is inching closer to his dreams of getting a world title shot as he has been presented with another high profile fight.

Commey, 28, will seek to annex IBF Intercontinental lightweight title to enhance his chances of getting an opportunity to vie for the world title.

Coach Carl Lokko told the GNA Sports in an interview that, his boxer was happy with the opportunity to fight Mamadjonov, since it will provide him the opportunity to showcase his talent in the USA which is regarded as the global home of boxing.

He said they will make the best out of the opportunity because they were bent on realising their dreams of making an attempt at the world title by the end of 2015.

According to the coach, his boxer will step up his training programme in order to keep up his shape for the fight.

'This is an opportunity we have been looking for and we cannot afford to let it slip through our fingers. Our aim is to compete for the world title in any of the ranks and this fight is a perfect opportunity for us to move towards that.' Coach Lokko.