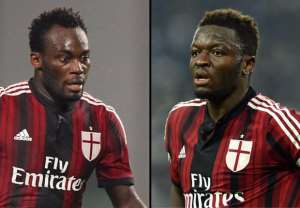 MLS or England? That's the question the rumor mill aks of the Ghanaian duo.

A series of reports have hinted that Michael Essien or Sulley Muntari might be thinking about a move to MLS, or New York Red Bulls (RBNY) in particular.

Less than a month ago, Muntari was described by one outlet as the "hot MLS cake".

A few weeks later, it was suggested the player might not be particularly interested in a move to North America. But that news broke at pretty much the same time a fresh wave of Muntari-to-MLS rumors arrived.

It would appear Muntari now has other options. Recent reports out of England have linked him to Hull City. And the latest rumors suggest his agent has been contacted by Everton.

Essien
Michael Essien was also loosely connected to RBNY around the same time the rumor mill was stop-starting on the Muntari whisper campaign.

Unlike Muntari, who has a year still to run on his contract with AC Milan (though both club and player, reportedly, are agreed he will leave in the summer), Essien will be a free agent at the end of the current Serie A season.

Essien (32) is older than Muntari (30), and has been a peripheral figure at Milan in both his seasons at the club (a succession of serious injuries has punctuated his career).

It shouldn't be a stretch for a player of that caliber to find a new gig as his career winds down. He may no longer be at his peak, but his peak was a much higher level than the majority of players ever reach.

And the rumor mill is working hard to get Essien to a new club.

Back in January, he was linked to MLS - reportedly turning down an offer from FC Dallas because it was "too low".

A few months can have a dramatic effect on a soon-to-be-unemployed footballer's perspective.

Essien also reportedly rejected a bundle of EPL clubs - West Brom, QPR, Leicester, and Burnley - because he didn't want to play for any team other than Chelsea in the league where he arguably produced his best work.

But all that was at a time when he still had several months to run on his contract. By June, it is assumed Essien will be a free agent. The latest rumor to emerge suggests he is on the verge of joining newly-promoted Watford, who need to build a squad for the 2015-16 Premier League season.

This would suggest decisions Essien made in January might not be immutable.

By the same token, the absence of MLS from the latest round of rumor mill mentions would suggest, as with his compatriot Muntari, that the Ghanaian's career plans may not include a stint in the USA or Canada.