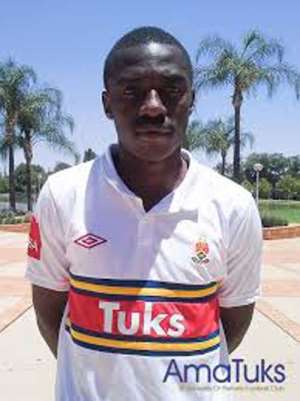 The Namibian import, Petrus Shitembi announced his move to his former club Amazulu fc during a special ceremony organized by Ashanti Gold on Thursday.

The 22-year-old midfielder, who joined Ashanti Gold in late September from South African giant Amazulu fc when bidding his farewell to the Miners expressed the love the playing body and the management showed him and how he wished to continue playing for them, but needed to move on to satisfy the terms of his loan move.

'You are a bunch of talented guys, with a lot of prospects ahead of you.  I don't know, but if I close my eyes, I could see that a lot of you will go further in your career.

'The sort of respect I have for you is more than being friends, but brothers. Whatever we've gone through and the time I got to know you gave me much pleasure.

'To the management, all the support I have gotten from you has been amazing. If it had left for me, I would have loved to stay, but circumstances have forced me to move back to honour my contract, Shitembi' told Ashgold players and management.

Shitembi played in his last game for Ashgold in their one all draw against Hearts of oak on Wednesday at the Len Clay Sports Stadium, Obuasi.

The Miners finished the first half of the season on top of the league log with 4 points separating them from the second placed team, Aduana Stars.