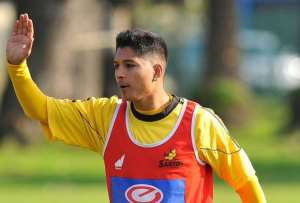 Hearts of Oak left-back, Shaun October says his side was unlucky in their match day 15 of the First Capital Plus Bank Premier League at the Obuasi Len Clay sports stadium against AshGold.

The Phobians settled for a 1-1 score line in the game after AshGold took a first half lead courtesy Didier Kore's 29th minute strike but the Accra based club in the second half gave their all as they pulled even late in the game through Emmanuel Sabbah Laryea.

In the game both teams created goal scoring opportunities but failed to hit the back of the net in some occasions but Hearts of Oak had the better and glorious chance in the game but the attackers for the away side scuffed their shots off target which the South Africa import, Shaun October believes that they were unlucky on the day.

'The game wasn't easy both teams were decent, we showed good fight in Obuasi and we should have won the game.

'We had very good chance to win the game but we were just unlucky but I hope we will work on our goal scoring in our subsequent games', Shaun October told Allsports.com.gh.

Hearts of Oak after their 1-1 draw game with AshGold now sit at the 10th position with 20 points at the end of the first round of the First Capital Plus Bank Premier League game.