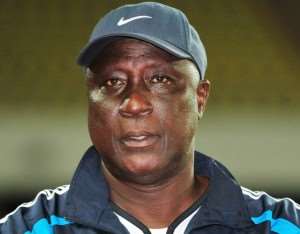 Head coach of league leaders Ashanti Gold, Bashiru Hayford says he is satisfied with his side's performance in the first round of the 2014/2015 league season but cautioned they had won nothing yet.

The miners closed out the first round of the league season with a bitter sweet 1-1 drawn game against Hearts of Oak at home.

The point picked up and Aduana Stars 1-0 defeat at the hand of Liberty Professionals meant AshGold finished the first round of the league at the summit with a healthy 4 point gap.

Reflecting on how his side had fared after fifteen round of games Hayford said the performance was satisfactory but there was still more work to be done.

“All in all I think we did a very good job but we still have to have in mind that there is still a lot of work to be done,' Hayford told GHANAsoccernet.com

''We understand that the second round would be very difficult than the first but we clearly also needed to get a breather so it's all good.

“We have to understand that we have won nothing and so we will work harder in the second half to pick up points to help us achieve our aim.”