Muniru Sulley: I don't see myself at CFR Cluj next season 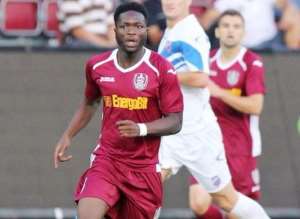 Ghanaian midfielder Muniru Sulley does not see himself at financially stricken Romanian side CFR Cluj next season.

The younger brother of AC Milan ace Sulley Muntari hopes to move to a club in the major European leagues.

Cluj were deducted 24 points and that saw them drop into the relegation and currently lie second from bottom.

However, there is a glimmer of hope of remaining in the Romanian top-flight after Tuesday night's 2-1 win over Concordia Chiajna.

“My future? Am sorry I can't discuss now because the season is not over yet. But I would love a new challenge after CFR Cluj helped me to develop the past two years. Moving to a bigger league and a new club is my priority anyway,” the 22-year-old told GHANASoccernet.com

Sulley has made 23 appearances for the Railwaymen so far.