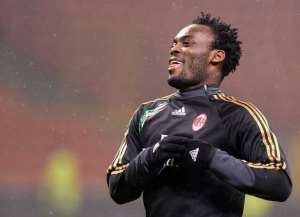 Players of AC Milan, including Michael Essien have been sent into a training camp at the club's Milanello headquarters until further notice as the once great side struggles to save its floundering season.

A mediocre performance led to a 2-1 loss to Udinese on Saturday,leaving the Rossoneri behind in the race for a place in the Europa league next season.

The team will reside at Milanello, which is also their base prior to home matches with enough rooms to accommodate all the players and staff, at least until Wednesday night's clash with Genoa.

The players were given permission to return to their homes to collect belongings before reporting back for what could be a long stay from Sunday night.

"The training retreat will continue until further notice and it could last until Wednesday or the 3rd, 10th, 17th, 24th or 31st of May. The decision is down to the coach and will be taken based on the quality of the team's performances,"  read a statement on the club's official website .

With six games of the season remaining, Milan trail sixth-placed Fiorentina and a possible berth in the Europa League by six points.

Milan's Ghanaian duo are both reported to be on their way out of the club at the end of the season with Sulley Muntari already pulling himself out of first team duty .