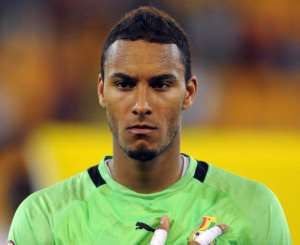 The 27-year-old has temporarily called time on his international career over claims he was unfairly treated during the 2014 FIFA World Cup in Brazil.

The Portland Timbers shot-stopper accused goalkeepers trainer Nassam Yakubu of unprofessional conduct after he was sensationally dropped after the 2-1 defeat to the United States of America in their opening game.

He has since turned down several opportunities to play for the Black Stars insisting he will only return when the time is right.

But former Ghana goalkeeper Abubakari Damba says Israeli trainer Avram Grant must only recall him into the team on merit.

“Adam Kwarrasey is a good Goalkeeper; we need competition in our Goalkeeping department he should be called into the National team if he is in form, active and efficient,” he is quoted by Globalsportsgh.

Ghana has struggled to find Richard Kingson's replacement with the likes of Razak Brimah, Fatau Dauda and Stephen Adams all failing to cement their position.

Current coach Avram Grant has held meetings with him in an attempt to persuade him into the team.