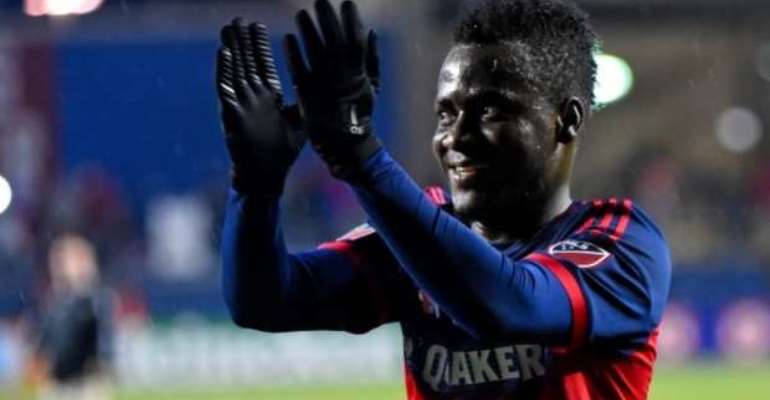 After witnessing him terrorize the New York City FC defense for 90 minutes, Chicago Fire head coach Frank Yallop warned the best is yet to come from David Accam.

Accam arrived at the Fire on a Designated Player deal from Swedish side Helsingborg, and the Ghanaian international hasn't taken long to show MLS his electrifying pace and eye for goal, scoring his first goal for the Fire after punishing an error from New York debutant goalkeeper Ryan Meara.

The 24-year-old produced a Man-of-the-Match performance in front of a sellout 19,124 crowd at Toyota Park, one of whom was his national team coach Avram Grant, as the Fire stretched their winning run to three and moved to fourth in the Eastern Conference on nine points (3-3-0).

'David is probably not at his best quite yet, I don't think, but he's very exciting obviously, [and] there's a lot more to come from him,' Yallop told reporters at the post-match press conference.

'David's an exciting player, and he's excited to be here. I thought he played fantastic tonight and, you'll have to ask him, but there's still more in him I think. He could be a little more attack-minded.'

A 'more attack-minded' Accam is sure to be a nightmare proposition for opposing defenses, and as his play continues to mesh with fellow attackers Harry Shipp, Shaun Maloney and the likes of Quincy Amarikwa, the Fire are sure to reap considerable benefits.

And Accam himself reinforced his coach's statement when he told reporters: 'I think I am 100 percent now, but I know I can give more to the team. I just need to keep working hard and I know there's more to still come from me.'

While the Fire benefitted from Andrew Jacobson's dismissal in the 23rd minute for fouling Accam from behind as he broke through the City defense, the Fire were well worth their victory, registering a whopping 24 shots on goal to New York's eight. That included an 18:1 swing in the second half.

Accam put his maiden goal in MLS down to hard work and a 'gamble' as he chased down a hesitant Meara, who struggled to clear his lines while attempting to prevent a corner kick.

'When you work really hard things come for you, and that's what we did today, work hard, and I'm not surprised I got the goal,' Accam said. 'I took a gamble on the ball, and when the 'keeper was going for the ball I just went straight to him and we got the goal. It's not simple. When you work hard everything comes to you, so it's not simple.'

While the pacy winger was guilty of missing a couple of chances and Meara redeemed himself with a string of superb saves to restrict the Fire to the solitary goal, Accam admitted he was disappointed that they couldn't add a second goal and kick on from there.

'It was [disappointing that we didn't get a second goal],' he added. 'Normally we should have scored three or four, we worked really hard, we created a lot of chances, and we should be taking more of our chances. But it feels great to get on the scoresheet, we got three points today and that's what we will keep working on.'