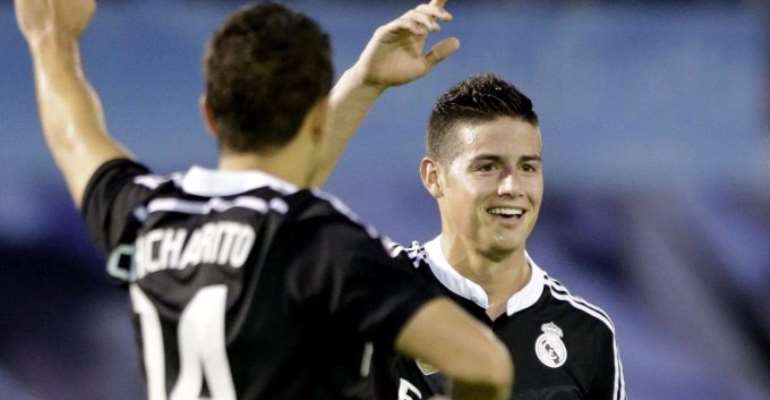 Javier Hernandez gave another boost to his chances of making his loan move to Real Madrid permanent when he followed up his match-winning Champions League performance midweek with a La Liga double on Sunday.

The Mexico striker known as 'Chicharito' (little pea) struck a late winner to earn a 1-0 victory over Atletico Madrid in Europe's elite club competition on Wednesday before helping Real to a 4-2 success at Celta Vigo that kept them hard on the heels of leaders Barcelona with five matches left.

Hernandez has spent most of the season on the bench after arriving from parent club Manchester United in September but coach Carlo Ancelotti was forced to draft him into the side following injuries to France striker Karim Benzema and Wales winger Gareth Bale.

While Benzema and Bale are likely to come straight back into the side once fit, Hernandez, who has made a habit of scoring off the bench during his club career, has shown he is a useful weapon to have in reserve.

Real have an option to make the 26-year-old's season-long loan permanent for a fee of 10 million euros ($10.86 million), according to Spanish media.

He is the son of namesake Javier Hernandez, a Mexico striker who featured at the 1986 World Cup and was nicknamed 'Chicharo' (pea) because of his green eyes.

"He's enjoying the run that he's on, it's a really good one," Ancelotti told a news conference.

"If Chicharito is in this form he's non-negotiable," added the Italian.

"I have a team of non-negotiables but only eleven can play and the rest stay on the bench."

Sunday's win at Celta kept the gap to Barca, who won 2-0 at neighbours Espanyol on Saturday, to two points.

Barca, who along with Real are through to the Champions League last four, are in with a chance of a treble of titles and play Athletic Bilbao in the King's Cup final next month.

"Our objective is to force Barca to win every game," Ancelotti said.

"At this moment in time we're not thinking about other teams, but about what we have to do.

"We're doing well and we'll try to fight for La Liga until the final day, which is our objective."

Real's next outing in La Liga is a home game against Almeria on Wednesday after Barca host Getafe on Tuesday.