By Ghana FA and ASG 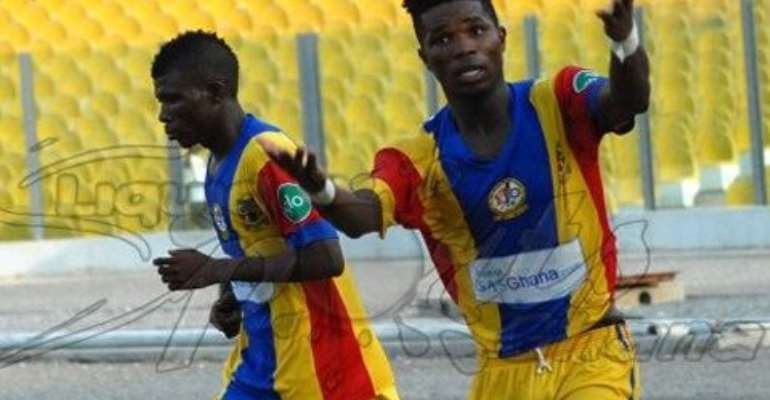 The much talked Accra derby lived up to the billing despite a goalless scoreline in the match between Great Olympics and Hearts of Oak played at the Accra Stadium on Sunday.

Estimated crowds were said to be about 15,000, which is an extremely creditable number in the current doldrums the local top flight sees itself.

The game which saw fans of both sides throng to the stadium saw many chances falling to the two teams but they both failed to break the deadlock.

Great Olympics paraded a team that had ex Ghana international goalkeeper Richard Kingston in post with Godwin Attram and Dan Quaye all in action for the “Wonder Club”.

The game
Great Olympics adapted the defensive type of football as they mostly caught Hearts on the break but they failed to hit the back of the net, In the 18 minute Referee Amenya denied Hearts of Oak a clean penalty after Eric Kumi was fouled by Ofoe Ofotsu.

The tempo of the game kept on increasing but the Hearts of Oak look the most dangerous side but the experience of Godwin Attram in the heart of Olympics midfield paid off for the ‘Dade Boys’.

The home side came close in fetching the opener after Agbesie wonderful header was exquisitely parried away by Soulama Abdoulaye. As the game was getting heated up the Phobians wonderful midfield inter positional play by Sabbah Laryea and Richard Yamaoah sent Gilbert Fiamenyo through on goal but his shot hit the side net as the first half ended goalless.

From the recess, Great Olympcs came in strongly which in the 48 minute Francis Attuquaye got a better of Ruben Gnagne as his strike missed the post narrowly. 7 minutes later Hearts of Oak turned the heat on the home side but the miscommunication between Gilbert Fiamenyo and Eric Kumi cost the Phobians the needed opener.

The Phobians started dominating game, but the away side the lacked the cutting edge upfront and the closet they came, Richard Kingston was there to the save the situation for Great Olympics.

However, 15 minutes to full time, Olympics nearly punished Hearts of Oak after a swift counter attack football at the right side of the away side defends but Soulama Abdoulaye rescued the Phobians. Hearts of Oak responded quickly but Fiamenyo drove his shot wide.

Late in the game, the leading marksman for Hearts of Oak, Gilbert Fiamenyo was put through on goal with only Richard Kingston left to beat who covered his ground very well, the burly striker shot hit the side net and with three minutes of time added on both sides failed to find the net as the game ended goalless.

Hearts of Oak will maintain their 10th position on the League log with Great Olympics also 13th with 17 points.

And elsewhere...
Meanwhile at the Agyemang Badu park, Aduana Stars avenged the defeat they suffered to Bechem United at the same venue last season after winning 1-0 on Sunday.

Richard Addae’s 7th minute goal was the only goal of the match as Aduana now returns to second position on the League table.

Bechem on the other hand are 15th on the table with 16 points.