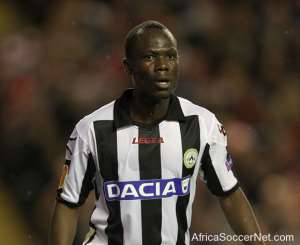 Emmanuel Agyemang-Badu scored for Udinese on Saturday in their home game against AC Milan.

The Ghanaian started and played in the entire duration of the game and scored what proved to be the winner but none of his international team mates Michael Essien and Sulley Muntari was named in the squad for away side Milan.

Udinese and AC Milan played out a goalless first half before Giampiero Pinzi opened the scoring for Agyemang-Badu's side.

The Ghanaian midfielder added a second for Udinese before AC Milan's Giampaolo Pazzini pulled one back with Udinese recording a 2-1 scoreline.

Michael Essien did not travel with the squad as he scheduled for a chat with Milan fans. Sulley Muntari also continues his mutually agreed absence from the AC  Milan team. Follow @kboakye92