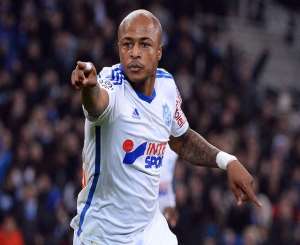 Ghana winger Andre Ayew has taken to Twitter to deny reports that he has agreed to sign for Italian giants AS Roma.

L'Equipe reported on Saturday morning that the Olympique Marseille ace, who is available on a free transfer this summer, has decided to join Rudi Garcia's if they qualify for next season's UEFA Champions League.

But the 25-year-old quickly squash the publication by Tweeting: “In the light of what I've read and heard, I would like to inform you that I have not yet taken a decision on my future.”

Last week, it was reported the second-born son of Ghana and Marseille legend Abedi Pelé had reached a deal to join Liverpool on a 42,000 pounds-a-week deal.